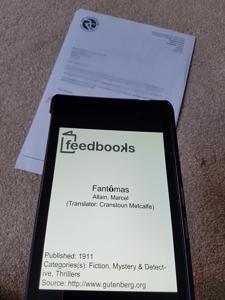 Context: We were approved as foster carers while reading this.

Every now and then on the 1001 Books list, a novel comes along which is a complete walk in the park, takes absolutely no effort to read and is over before you know it. Fantômas is just such a novel.

Written jointly by Marcel Allain and Pierre Souvestre, who often wrote separate chapters independently before weaving them together, the Fantômas series of novels took France by storm about 100 years ago.

Based around the idea that a series of crimes are actually the work of one criminal mastermind, and a villain whose identity proves elusive to even the best detective in the land, you are constantly on the move from suspect, to crime scene, to aftermath … it’s hard to keep up with it all.

There are enough twists in this short novel that you are going to be caught out by at least one of them. However, Allain and Souvestre leave enough clues for anyone who likes figuring out whodunnits while at the same time ensuring that you know little enough to keep reading.

In fact, as the novel kicked off a series of over 40 books, you should definitely not expect a resolution at the end of this one. Far, far from it.

This is not beautifully crafted literature by any means, and it’s not the best crime fiction you’ll ever read either. But it was so widely read and so hugely influential in its native France that it is not surprising that such influence spilled over into other genres such as comic books.

As such, it’s worth a read in much the same way as you might read Tarzan, knowing that it was the beginning of something special for the world of written and filmed entertainment.

I read this in 69 daily installments care of dailylit.com – a wonderful idea of a website. REVIEW: Huxley had a masterful vocabulary and he uses it to full effect…

An audio book from www.inaudio.biz and read by Ralph Cosham. REVIEW Another product of its time. I found this better written than the couple of Verne’s books I’ve read.

This was not at all what I expected from the title. In fact, even having finished it, I really have no clue as to why it is called this at…

A remarkable novel from start to finish on pretty much every level except, as my rating shows, on the development of any memorable character worth remembering or any plot. But…