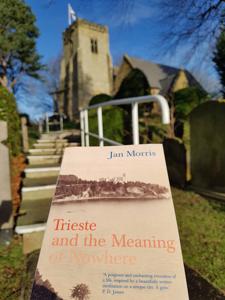 Context: Was reading this when we went for a 10 mile walk on Christmas Day and had our Christmas lunch in Scalby parish church yard.

A very, very long time ago, I read a trilogy by a man name James Morris, the sublime Pax Britannica. It wasn’t until many years later that I realised the woman writing under the name Jan Morris was in fact the same person as James, if I’m allowed to say that. James became Jan in 1972. In fact, I still possess a set of that trilogy under the name of James.

Having eulogised the trilogy to Mrs Arukiyomi (who has, tellingly, yet to actually start it), I found myself staring at a copy of Trieste and the Meaning of Nowhere on Christmas morning. Jan Morris having died in November, 2020, the missus thought that her final novel would be a fitting Christmas pressie.

The city is somewhere I came very close to visiting on a long overland trek from Beijing to Basel via 14 countries back in 2008. Hitchhiking up the Adriatic coast just north of Split, we were picked up by a guy delivering tyres not to Trieste, as we had hoped, but instead to Zagreb. It was a massive distance to bag in one hitch, and so we took it. I still have never visited Italy. Morris’ book was therefore a needed introduction.

Although Trieste can hardly be called Italy proper. Being, as it is geographically and therefore culturally, linguistally and so much other-ly on the periphery of that nation, it has struggled for its entire history to know exactly which direction to look for its sense of purpose. This is possibly why Morris considers it so fascinating because it, of course, allows the book to explore all sorts of issues with identity… a subject that is of some relevance for someone who has made the transition to transgender.

That Morris should end her writing career with a focus on Trieste is surely no accident. It was there that, arguably, James began his writing career having formed part of the British occupying forces at the end of WW2. Trieste was a regular part of life with many visits over the years. The book has a ring of melancholy throughout as it describes various aspects of the city’s history and ends quite movingly.

But I have to say, it didn’t captivate me throughout. Morris is astoundingly well read and while I do know a thing or two, it was hard to keep up sometimes. Thankfully, I have a fair bit of Joyce under my belt and have read Burton’s translation of The Book of the Thousand and One Nights (and, yes, all the footnotes!). I was therefore fascinated by accounts of these two residents of the city and how it had, possibly, influenced their writing. Much of the rest of it, though, passed me by.

It’s a pleasant enough read. At its best, the prose, is charged with meaning and evidence of months, years of meditation on the city… and therefore of life in general and Morris’ life in particular. I wouldn’t tell anyone they needed to go out and buy a copy, but if you do come across one and you fancy whiling away some hours in reverie, Morris’ Trieste may be just the place for you.

Such was the impression this book left on me that I completely forgot I’d read it. I made no note of it in the list of completed books I keep,…