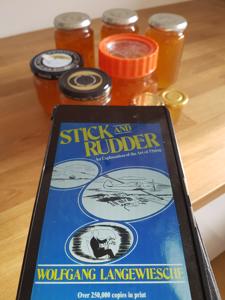 Context: Mrs Arukiyomi made our year’s supply of Seville marmalade
while I was reading this. Yum!

I’ve always been fascintated by flying and, since building myself a computer that can cope with it, I’ve been using a flight simulator to teach myself how to fly. Stick and Rudder is one of those texts that anyone learning to fly is recommended to read. It was first published in 1944 when getting people (read: men) to fly was somewhat of a US government requirement.

Getting people in the air was one thing. Helping them stay there was an increasing problem. The world had rushed headlong into flight but hadn’t put as much thought into what people might do while they were up there. It turned out that they were likely to do many things that seemed logical but were actually going to kill them.

Along came Wolfgang who compiled articles he’d written for aviation magazines along with a section by a colleague and a classic was born. The fact that it is still widely read today when aviation technology has changed beyond recognition belies the fact that, when it comes down to it, the fundamentals of flying remain unchanged.

As someone who has literally only had 2 hours and 55 minutes’ real flying time (Piper PA-28) in his life (and prob. over 100 on a sim), Langewiesche’s lessons are invaluable. The basic premise is this: it’s all about making sure that your angle of attack isn’t too high. I don’t think there was any situation described in the book in which death wasn’t immediately preceeded by stalling and stalling by too high an angle of attack.

If the phrase “angle of attack” is a mystery to you, it’s either because you have no interest in flying and don’t need to know or because you do have an interest in flying but have been learning the wrong things. It’s you, budding aviator, who needs to get a copy of this. Some it is a bit repetitive, but that’s probably necessary. It’s essential reading.

You can probably leave aside all the quaint advice about tightening the stays between your wings and landing aircraft with wheels under the tail. However, you ignore the rest of the book at your peril … and that of anyone with you or beneath you.

This little novel packs a huge punch even today, 50 years after it was published in a Sudan that was in no way ready hammer blow of this magnitude to…

This has the subtitle The Science of the Sense that Makes Us Human, but nowhere in it will you find an explanation as to why touch apparently makes us any…

Context: finished this off while doing weights. Jogging’s on hold as my left hamstring recovers from a slight strain. REVIEW Okonkwo is a man who doesn’t do things by halves….

I actually downloaded a copy of this and listened to it over 4 hours. Beautifully read by Jerry Farmer in a great American drawl. REVIEW: The characters were magical and…