Recently added to the 1001 Books list in the new October 2018 edition, this title was worthy of its inclusion capturing, as it does, the state of race in a nation founded on racism. I listened to the audio book read by Adjoa Andoh and she did a superb job of bringing all the African accents to life. Highly recommended.

Now, before I get into this, I just have to add an explanatory note for any USAnian readers who may be confused as to why there may be a need for such a book.

Prior to the arrival of the British, other people lived in what is now the USA, and the new people, who subsequently, and with no claim to the title, called themselves Americans, carried out a deliberate and very much orchestrated campaign of genocide against them. There may be some for whom this comes as a revelation. If so, please stop reading my review and immediately pick yourselves up a copy of Bury My Heart at Wounded Knee. When you’ve finished that, come back here and carry on.

It’s true, as they say, that freedom-lovers founded the USA. But the small print revealed exactly whose freedom they had in mind. When USAnians get up every morning at school and say the line “with liberty and justice for all” what they really mean is “liberty to live under the political system we’ve subjected you to without your say and justice as long as it doesn’t include giving back the land we stole from you.”

Your average USAnian has no idea that their nation was only made possible through the application of racist ideologies that Hitler would have entirely approved of. Thus, there is a very real need to continue to make this apparent, because that wound, once opened, has suppurated ever since. In the meantime, US propaganda continues to spout about how they are the largest lovers of freedom and defenders of democracy. The trouble with democracy is, if you get enough people who hate blacks and foreigners together to vote, you can legitimise racism; you can elect leaders like Trump.

And so Ifemelu finds herself not just black but also foreign as a student in the USA from Nigeria. Aidichie very deftly explores how she deals with the racism she experiences. That this racism is mostly subtle should not be a stumbling block for anyone. While it definitely doesn’t mess up your day as much as stop and search, comments about hair, dress, education, family, food all form part of Ifemelu’s experience. Aidichie comments on interracial relationships as well as international ones and, to complete the set, also has Ifemelu return to Nigeria to face the rigours of reverse culture shock.

Meanwhile there’s a side story of Obinze, Ifemelu’s childhood sweetheart who ends up a student in the UK. Unlike Ifemelu however, Obinze falls foul of the law when he overstays his visa and attempts a sham marriage to get residency. While you’re full of sympathy for Ifemelu’s plight, it’s hard to muster any up for Obinze other than that he is the victim of global injustice and chance. It’s not long before Obinze is back on his home turf and, if there’s a weakness in the novel, it’s that Aidichie really can’t seem to decide if this is the story of Obinze and Ifemelu or just Ifemelu. Personally, I think a focus on Ifemelu alone would have made for a stronger storyline, particularly with the saccharine ending that hardly seems necessary.

Novels become classics because they both capture the spirit of an age and cast a spotlight on ourselves as a society. Americanah has the makings of a classic, but I doubt we’ll learn any more from it though than we did from Bury My Heart at Wounded Knee. 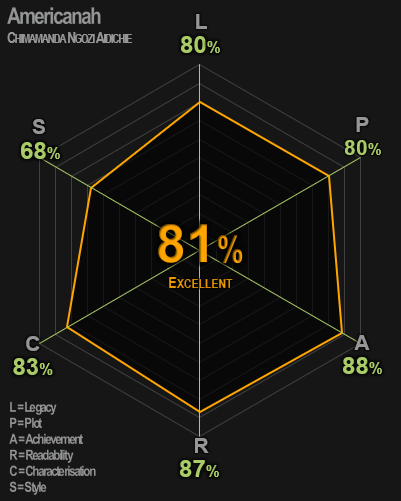 I was lent this by a colleague at work and laboured at it for a few weeks. REVIEW: Boy this was tough. Don’t get me wrong. Despite Hesse’s love for…

Had I not read Angela’s Ashes then this would have been unique and would have totally captivated me. But seeing as this was published just three years after Ashes, I…

Littell’s meticulously researched memoir of an SS officer is a book that no one who reads it can ever forget, and that’s exactly how it should be. It’s absolutely horrific,…

This is by a long way the shortest item you’ll read on the 1001 books list. I’m not really sure why it was included at all in a list of…