This memoir is basically a eulogy to Gary’s mother. Seeing as I have never really had a mother to speak of, this was an interesting one for me to read as a kind of “what if”, all the while imagining I’d had a female role model there to love, encourage and inspire me to head for my dreams.

My mother never wanted children, drank heavily, was emotionally and physically violent, left us when I was 9 and then fought for custody just to spite my father, lost and then won the right to force us to spend one holiday a year with her until we were 18 and could decide whether we wanted to see us or not. Romain Gary’s mother was not like this.

In contrast to me, Gary grew up without a father to speak of although he suspects in the book who it might be. Instead, his mother becomes both parents in one and pursues the unlikely dream of emigrating to France. Quite why she was besotted so much with France Gary never quite understands. But, contrary to all expectations, they do indeed end up settling in France.

In addition to her almost divine powers to determine her son’s nationality, she also manages to somehow determine his future as a great writer and diplomat. Again, against almost incredible odds, this is exactly what happens. So, the tale is at once a poignant memoir to his mother while at the same time an interesting one of how Romain Gary came to be the man he was to be.

And the tale is well told. While the book’s latter half was of more interest to me than the former, it is told with some humour and character. I found his experiences in the French air force to be of most interest, in particular the racism he suffered and his desperate attempts to flee France when the Germans invaded. All in all, this was a pleasant read about the early life of an interesting man I’d never heard of. 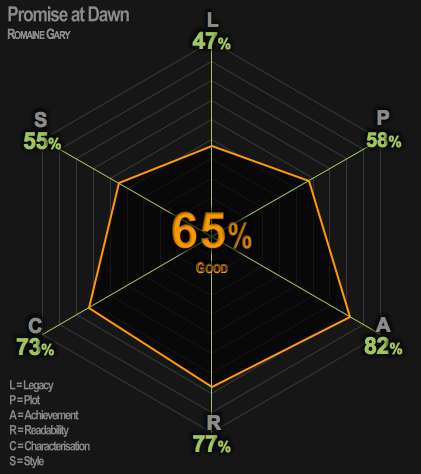 If you’re after a pacy novel with a great storyline and memorable characters that zips you from A to B in a rush of finely written prose, you’ll need to…

Context: Started this at the Mapang Guesthouse in Port Moresby before heading back to the UK. REVIEW This is more of a short story than even a novella, but what…