This completed my reading of the canon of Charlotte Brontë’s completed  novels. Mind you, she only wrote three. I started off with Jane Eyre which I thought shallow, contrived and fell far short of the place it has in the pantheon of English Lit. I then tackled Villette and was mesmerised by an extremely accomplished author. Those were her first and last books. Shirley falls slap bang in the middle chronologically and, as a result, shows Charlotte in her adolescence: there are glimpses of the maturity she would later attain with Villette and stretches of the banality of Eyre. On the whole, I thought this was okay and that Villette could not have been written without it.

Set at the time of radical changes in industrial Britain, Charlotte uses the backdrop of the Luddites to set what is, apart from this, an unremarkable double romance that Austen would have been jealous of. Although introduced almost at the start, the revolutionary changes to working life Britain did not play as large a part as I hoped they might. There are very few novels of this stature that deal with this period of history and it would have been a much richer read had Charlotte capitalised on this.

I’m not really sure why the novel is called Shirley. Yes, one of the main characters is a woman called Shirley, a headstrong young heiress who, you feel inevitably will end up marrying someone. But the chief character is Caroline, the Yin to Shirley’s Yang and the cousin of a mill owner who is at the centre of the harsh and brutal world of 19th century commerce.

Caroline’s a bit of a sap. Besotted as she is with a certain character, she can never bring herself to speak of her besotment to her besottee. She pines at the slightest hint that his world may not revolve around her. On more than one occasion I wanted to give her a good slap in the face. Shirley is built of sterner stuff and turns down numerous suitors, included the local gentry. Her heart has already been won. But who by? Oh the suspense. I didn’t see the ending coming until oooh… about halfway through this 500 pager.

So, the ending is pure pastiche but along the way, you have glimpses of the great insight into the personality of her characters that would come to full maturity in Villette. If you had to read one Charlotte Brontë novel, it would have to be her last. But, if you had to read them all, Shirley is a worthwhile waypoint to visit as you get there. But if Charlotte had lived longer than her middle-age, perhaps novels like Eyre and Shirley would have been consigned to oblivion by the greatness she would undoubtedly have attained after Villette. Fate was to write a different story however. 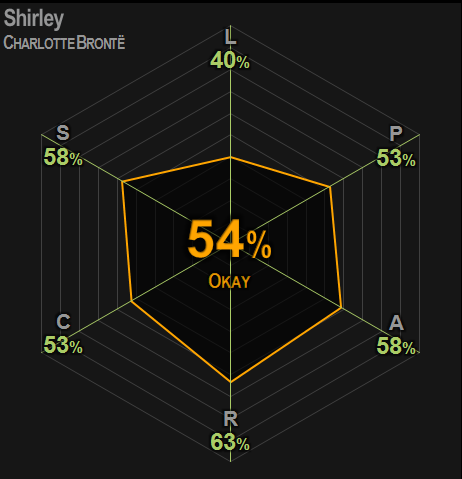 Again, another Auster, and the only question you’re left with is why he bothered writing it. Composing this review by copying and pasting chunks of my review of The New…

From the very first classic opening line through to the end, this is a page-turner. Plath wrote this very quickly and it shows in the effervescence of the prose. However,…