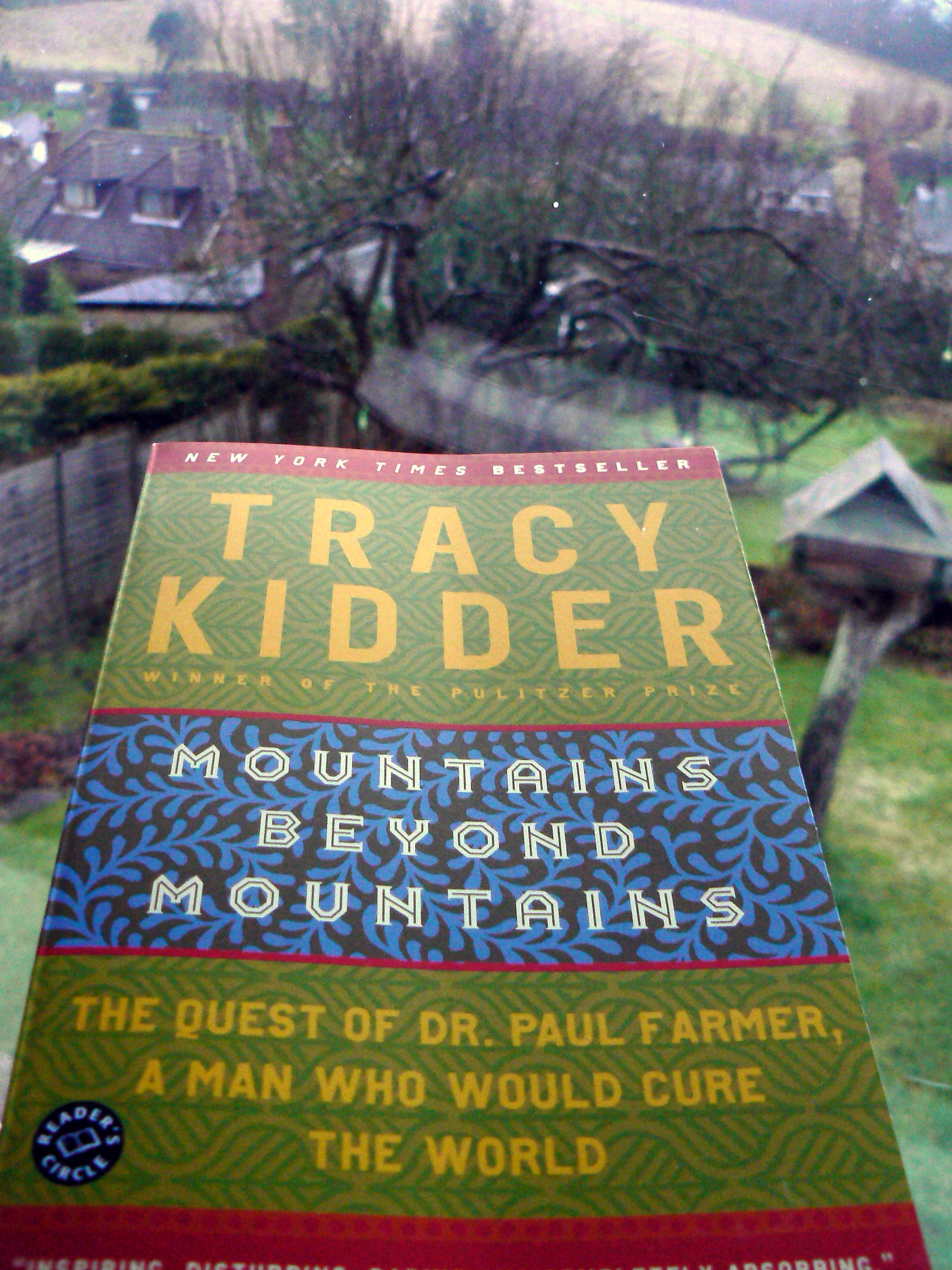 Context: Started this off at a friend’s house in Studley Green in the rolling Chiltern hills.

REVIEW
Another book given to me on my last birthday which I thought I should finish by my next. In fact, I even had two months’ start on this one as the lady who kindly gave me it thought my birthday was in March when it’s in May. I’m glad I waited actually because a large part of the story takes place in Haiti. It wouldn’t have been the same had I not been aware of it since the earthquake.

The story is ostensibly that of Paul Farmer, a genius whose drive and determination, not to mention his rather large IQ, have been responsible for one of the most remarkable stories in recent medical history. Starting out with nothing, not even a medical degree, Farmer travelled to Haiti back in the 1980s. He realised very quickly that something should be done for those who were dying for lack of healthcare, particularly from TB. He reasoned that if something should be done, and he could do something, then he should be doing something. That simple philosophy has created Partners in Health which is now one of the world’s leading NGOs combatting TB and AIDS in several countries around the world.

I like his philosophy. It’s all too easy to come away from a biography of someone like Paul Farmer and fee inadequate. The cover of this book is littered with quotes eulogising him with reviewers saying how inspired they were by reading it. But why did they need to read this to be inspired to alleviate suffering? Surely, all of these critics were aware of the fact that for most people in the world, access to basic healthcare is a luxury, not a given. I wonder exactly what those who said they were inspired are actually doing differently now…

As for me, it made me realise (yet again) that if you want to move mountains, the people close to you are going to suffer the tremors and aftershocks of your efforts. Kidder is a very sympathetic biography who truly understands his subject. And yet even he had to mention on more than one occasion Farmer’s impact on his family and closest friends and colleagues. It’s almost as if people could only be close to him on his terms. I wasn’t very comfortable with that. I find the tension between meeting the needs of the stranger and the needs of the acquainted difficult to reconcile sometimes. How should we choose? For Farmer, the choice was clear. I’m not sure it is for me.

The book is at its best when it chronicles many of the numberless patients that Farmer and PIH have treated over the years. Some, actually most, of these are heart-breaking. The book does however spend long amounts of time in boardrooms and on committees raising funds and pulling strings in government hierarchies. This is, of course, all an absolute necessity for the success of PIH. It just didn’t make engaging reading for me. For the story, I wish it had stayed small and Haiti-based – with more intimate relationships and struggles. Once it went global, it all became a bit impersonal for me. It must have been hard for Kidder to balance the two and I’m not sure the balance has worked out.

For me, one of the most memorable parts of the book was when Farmer receives an email from a medical student saying he’d like to help but that he can’t do what Farmer’s doing. Farmer is outraged. “I never asked you to do what I’m doing,” he raves out loud, “just do what you can.” So, the story of Paul Farmer and PIH has inspired me – it’s inspired me to see what should be done and, if I can do it, do it. If not, leave it for those who can. This means not getting on anyone’s case for not doing what I’m doing either. That’s an important message for someone, like me, involved in language development which not many people understand, let alone undertake. Maybe that’s what the reviewers are talking about.

FIRST LINE
Six years after the fact, Dr. Paul Edward Farmer reminded me, “We met because of a beheading, of all things.”

CLOSING LINE
I felt tempted to ask Farmer if [open-heart surgery] was appropriate technology-not to hear the answer, just to hear him say it. Context:I read this just days before I came across a cargo cult that it described in the village of Male in Papua New Guinea.  REVIEW I would have passed this…