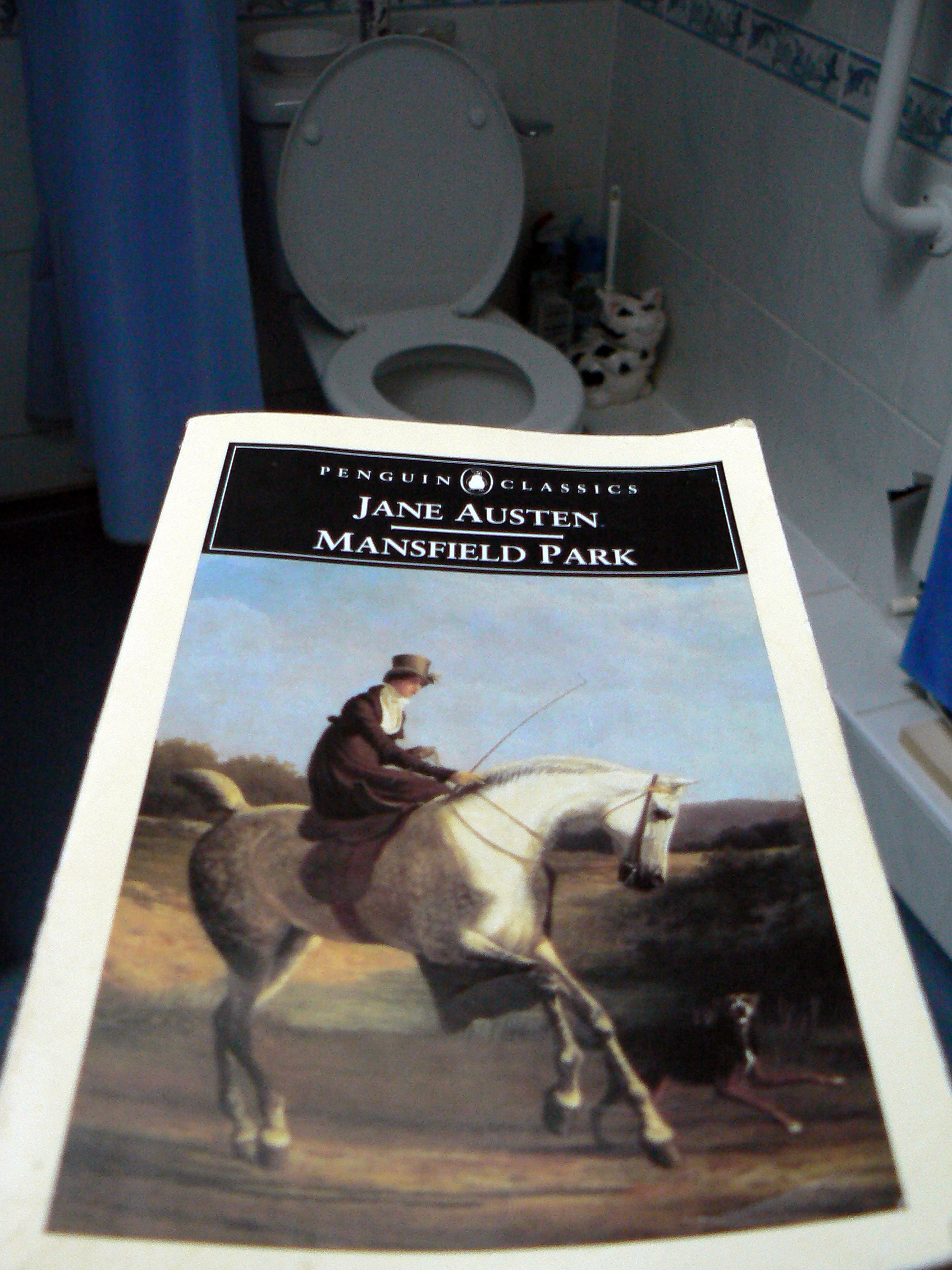 Context: This was my toilet book at Field View. It’s amazing how much you get through on the loo and while brushing your teeth.

REVIEW
Take a ball, a lovers’ tryst, an elopement, a love-triangle, unrequited love, a touch of class distinction, a country estate, a parson and a tentative feminist and shake well. Serve cold with a dash of loquacity. Voila, a Jane Austen novel.

Mansfield Park was the third in a series of novels that would revolutionise English Literature in a mere 6 year span. But, to me, it differs little from Pride & Prejudice except that it could do with being half the length it is.

I could not, for the life of me, discover anything worthy of comment for the first half of the book. Absolutely nothing is memorable. Quite why the attempted theatrical performance should merit such a protracted description and dominate the first half is beyond me. It’s almost as if Austen realised that, halfway through, she wasn’t really going anywhere and changed tack.

From her brother’s promotion, the book actually starts to develop. By then you’re well over 200 pages in. Events come thick and fast and the characters seem much much stronger in the latter stages than early on.

I read an edition that was based on the first, even down to spelling. It’s amazing how the language has changed so much in two hundred years. At one point Crawford, who eventually runs off with a married woman, says “It is Fanny that I think of all day and dream of all night.” You couldn’t get away with that now in Brit Lit!

So, I slogged through this and never thought it would end. Of course, I knew exactly how it would end – all happiness and light. But this, of all Austen’s endings must be the most rushed. After nearly 400 pages, the novel collapses in on itself in the last ten with brief summaries of the fortunes of each of the characters. Austen must have been Disney’s inspiration. She could certainly write their screenplays. There are no surprises here, all loose ends are tied up, all the baddies reap what they sow and all those for whom patience is a virtue end up rewarded. Shame this doesn’t match the reality of her readers.

FIRST LINE
About thirty years ago, Miss Maria Ward of Huntingdon, with only seven thousand pounds, had the good luck to captivate Sir Thomas Bertram, of Mansfield Park, in the county of Northampton, and to be thereby raised to the rank of a baronet’s lady, with all the comforts and consequences of an handsome house and large income.

CLOSING LINE
On that event they removed to Mansfield, and the parsonage there, which under each of its two former owners, Fanny had never been able to approach but with some painful sensation of restraint or alarm, soon grew as dear to her heart, and as thoroughly perfect in her eyes, as every thing else, within the view and patronage of Mansfield Park, had long been.

Another bookshelf breaker under the belt. Now, I’m a real Les Mis fan having seen the musical in London four times, but this did not actually meet my expectations in…

Context: Listened to this as we used various dugout canoes to travel down the lower reaches of the Watut River in PNG on a language survey. REVIEW As I listened…