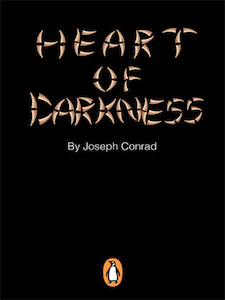 REVIEW:
I actually listened to the public domain audio version of this available at www.librivox.com

Dark is the right word for this book. On every level I found it depressing from Conrad’s pandering to melodrama right through to the subject matter. Not a single good thing happens in the entire episode. The whole is dark; the people, the weather, the water, the minds and motivations of the central characters. If Conrad actually speaks through the storyteller in this book, then he was one hell of a miserable, ethnocentric guy.

I didn’t enjoy it one bit. Sure, the subject matter was dark but then I’ve read novels that are dark (take Roy’s God of Small Things as one example) but captivate through their style. Conrad has about as much style as a B-grade 1930s horror movie. Everything is over-exaggerated. It can’t just be a tree. It has to be a towering figure of doom wrought throughout with the shimmering evanescence of the myriad leaves... or some such laborious description. The characters all struggle with their own selves as if this is all we are born to do. At every turn of the page you fight back the urge to smack them all in the face and just say “Lighten up will you?!” . This gives it all a very unrealistic quality. After all, no one takes themselves that seriously even if we are all prone to wonder at ourselves. The effect is to create a flat two-dimensional array of characters that can only be regarded as ethereal – perhaps that was his intent.

As a glimpse into the world of savagery it is interesting provided you yourself possess your own heart of darkness. I’m desperately hoping that Conrad ironically intended the image of savagery to be painted by the colonisers and not the colonised. That would be subtly and nicely done. But I’ve a nasty feeling that he really did consider Africans as savages and himself as the noble higher race. If so, this book is appalling in its worldview, something I’ve since discovered others, including no less than Achebe, have been critical of.

OPENING LINE:
The Nelly, a cruising yawl, swung to her anchor without a flutter of the sails and was at rest.

WORDS:
yawl: A two-masted yacht in which the smaller after mast is less than half the height of the forward mast

CLOSING LINE:
It [the Thames] seemed to lead into the heart of an immense darkness.