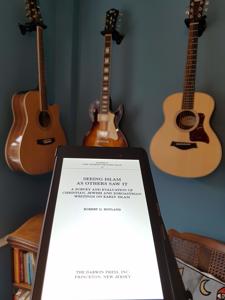 Context: Finally got the guitars up on the wall while reading this.

What Hoyland has tackled here is no less than a complete literary survey of any non-Islamic writing that refers to Islam between its 630 AD emergence and 780 when it had achieved a degree of self-definition.

Any scrap of writing (including that on artefacts and buildings) from this period that has any bearing on Islam has been documented and, in very many cases, quoted where it has anything to say about the rise of this influential religion.

The scope is exhaustive, and it is meant to be. It is a quite astonishing scholastic achievement which included, among other things, Hoyland actually translating documents into English where this had never been done. I wouldn’t describe it as a page-turner, at times it’s a bit dry. However, you do expect that from this genre. Get into the texts he presents however and it brings this era of history alive in a way that I’d never experienced before.

Islamicists, who once rejoiced that their subject “was born in the full light of history,” have recently been discovering just how much apparent history is religio-legal polemic in disguise, some even doubting whether the host of Arabic historical works that appear in the late eighth and early ninth centuries contain any genuine recollection of the rise and early growth of Islam.

He then goes on to cite the examples of Cahen, Crone and Cook who delved into this area but laments the fact that others have not pursued this line of enquiry. To address that, his work is an attempt

to elucidate and expand what constitutes Islamic history, …. [by] … drawing upon the writings of Christians, Jews and Zoroastrians

His thesis is sound: If you want to be sure of what someone claims, you need first hand testimony as well as witness testimony.

So, what did I learn?

Well, I learned that isnads shouldn’t be dismissed summarily:

By the late ninth century, isnad criticism was highly developed and scholarship
professional, so one should not simply dismiss isnads as fictitious without some consideration.

Instead, we can dismiss them after “some consideration”.

I learned that claims that Hajjaj ibn Yusuf revised the text of the Qur’an are attested by both Islamic and non-Islamic sources and that we can trust the latter to the extent that they are corrobated by the former.

But the greatest thing I learned was that the burden of proof for the traditional story of the origins of Islam lies fairly and squarely with those who promulgate it.

before AH 72 the archaeological record is strangely silent about Islam, and this despite the fact that we do have a fair amount of material from this time. A similar problem occurs with regard to the Qur’an, which seems to have been ignored by Muslims as a source of law until the early eighth century.

There are also a few more problems the story that we typically hear.

The total lack of specifically Islamic declarations made by the Sufyanid line of Umayyads, the proliferation of them issued by the Marwanid branch and the religious causes espoused by the various opposition movements of the intervening civil war lead us to the conclusion that it was pressure from rebel factions that induced the Marwanids to proclaim Islam publicly as the ideological basis of the Arab state.

This is where that “consideration” Hoyland mentioned comes into play. We have isnads, but when we consider specific hadith and their respective isnads, we have to give “some consideration” as to why we have the ones we do.

For anyone with an interest in pursuing the reality of the origins of Islam, it’s a masterpiece and a required read.

Oh, what a question? How could you even ask that? But, yes, this is exactly the kind of question Islam should be subjected to. For the last 200 years, beginning…

What the chart of my progress below does not reveal is that the day I started this was in fact in May 2013 whereas I didn’t finish it, after a…