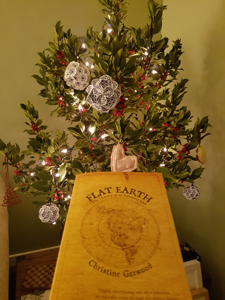 Context: Read this while enjoying our holly Christmas tree – the result of beheading our once-too-tall tree in the back garden!

Just before Christmas, this popped through the door completely anonymously. Tearing it open, it sounded like just the thing to while away a day or so reading over the break. I finished it on the second day.

Do not take my quick read as any evidence for how well written this novel is. In fact, I finished it despite Christine Garwood’s best effort to document the history of the modern flat earth movement from the early 19th century to somewhere around 2007.

This span of time is one of the book’s many weaknesses. Garwood unfortunately ends when flat earth theories were just getting warmed up on the Interwebs. Any book with “Flat Earth” in the title and Mark Sargent and his companions missing from the content just isn’t doing the subject any justice… at least as far as humour goes.

However, the main issue with Flat Earth is that although Garwood rightly considers that modern belief in a flat earth “raises issues central to … the uses and abuses of information” (p. 35) she then fails to actually give this any real consideration. This is a mighty failure.

The fact that people believe that the earth is flat in the 21st century is really of no consequence to any of us who don’t. It’s in no way a threat. But what is potentially threatening to all of us is how people come to believe in a flat earth and maintain those beliefs. That Garwood does not deal with this issue more substantially than in a 12-page epilogue is a serious shortcoming.

Instead, the book rambles through the usual suspects beginning with a long section on Rowbotham through mandatory coverage of the Bedford Levels controversy leading inevitably to Lady Blount. It then makes a brief foray over the Atlantic to spend a moment on Voliva before settling back in the UK for the dawn of the space age.

At this point, just when I thought it was going to get interesting, Garwood starts to let unfettered access to the correspondence of Samuel Shenton cloud her judgement. Maybe to justify some fee she had to pay for access, she feels the need to detail individual correspondence that is at best banal and at worst repetitively banal.

Sadly, this continues when she shifts the focus back to North America where correspondence of Leo Ferrari and finally Charles Johnson bludgeon your interest to death. By the end of the book, you’ve stopped caring. Here’s a sample:

During 1973 further positive developments were to transpire. Nowlan had finally finished his first novel, Various Persons Named Kevin O’Brien, and disappeared on a working holiday to Campobello Island to continue the research for his official history. Leo, meanwhile, went camping in California where he hoped to further his medieval studeies and promote the society’s work. More promising still, he was not alone on the trip. Earlier that year he had met a new girlfriend, and together that summer they clocked up approximately 12,000 miles in Ferrari’s 1966 Chevelle. While Ferrari was enjoying ‘wine, sunshine and the best of company’ in California, he joked on a postcard to Nowlan that he was … (continues for 94 pages)

That the book was in need of a better editor is made more evident by an appendix that contains a list of “Scriptural ‘Proofs'” for a flat earth cosmology from the Old Testament. Quite why Garwood felt this was necessary is not obvious. The Bible and the influence of those who interpret it literally is mentioned fairly consistently, but not enough is made of how it is an inability to correctly apply hermeneutics (to all texts, not just biblical ones) that is really at issue here.

The most apt quote of all is the only one I will assuredly take from my reading of this work. in the 19th century, Charles Kettle was responding to correspondence with a flat earth believer who said that as no one had seen the earth as a globe, how could anyone say it existed. Exasperated by the bad logic that often accompanies debates on the topic, he replied

You have not seen your own brains. Do you believe you have any?

Having read Flat Earth, I was just waiting to complete this review before sending it on to a close relative of mine who believes the earth is flat. However, just yesterday, I received an email from her admitting to being my benefactor. I was somewhat surprised at this seeing as Garwood clearly is of the opinion that belief in a flat earth is an “apparent absurdity” (p. 35). I’m going to have to find someone else to pass it on to then!

Context: Finished this off while using a hot water bottle to ease an ache in my hamstring. Too much jogging. REVIEW A good ethnography gives you an inside view into…

Context: The first book I finished on my new Sony Reader. Read while the snow melted on the new housing estate foundations they’re building over the road. Thi REVIEW This…

Another Bellow, another fellow. This time it’s Augie, a Jewish kid from the ghetto who we follow entirely randomly as he grows and flows out into the world and all…

Context: Read this while we visited our friends’ lovely house in Newcastle. REVIEW I’ve had this on my shelf for a very long time and imminent emigration to Papua New…