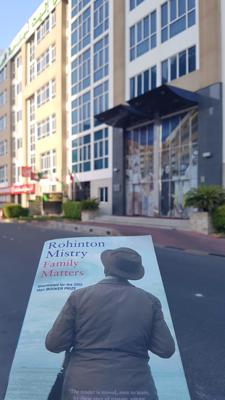 Context: Returned to Bahrain so the wife could do two more weeks work at her old school.

Not a patch on A Fine Balance, this starts out alright with a family fighting to survive on the fine margins of lower-middle class Indian life. However, once things settle down for them, the tension that kept you going dissipates and the novel peters out rather blandly.

Because A Fine Balance is such a powerful novel, I wouldn’t even bother with this unless you have a keen interest in Zoroastrianism. In addition, the novel has parts written exclusively in an unidentified Indian language with no explanation as to their meaning which seems a bit strange.

The novel initially centres around Nariman Vakeel, a septuginarian with Parkinsons who is cared for by a family typically riven by infighting and social posturing. While the focus remains on him, the novel is a poignant one and, had Mistry, maintained this I think it would have been very powerful.

However, about halfway through it gradually drifts off to focus on Yezad, the son-in-law whose family have taken in Nariman. This is a far less satisfying read and things don’t really develop in the way I’d hoped to keep my attention going any longer.

I also noticed that characters which are introduced seemingly innocuously always turned out to have a significant role later on. Far too contrived for an author who, as he’s proved, can do so much better.

Mistry started in the right place. Had he published Family first, he wouldn’t have had a hit. If you want more of Mistry and have read A Fine Balance, dig out your copy of that and read it again.