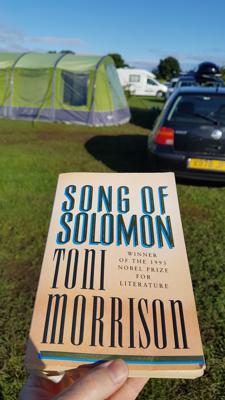 Context: Went camping in Northumberland with the in-laws while reading this.

Very readable for a Morrison so that’s a bonus for a start, even though it does bear her trademark style. If you’ve not read her before, this is a great place to start, and in the current climate, it should be on any white person’s required reading list.

In a northern US black community, the novel centres on Macon Dead, a man who goes in search of his past and, in doing so, confronts questions about his identity.

For the first time, Morrison brought me face to face with the issue of identity for the African American community for whom the idea of family history is not a simple matter at all. The complexities are reinforced no doubt by the insistence of every white person in the US to define themselves not as a US citizen primarily but some bizarre concoction of (usually) European nations.

“Hi, I’m Emily. I’m quarter Dutch, half Irish, six eighths Belgian and have a smattering of Italian on my father’s side.”

“And my grandmother was half Navajo.”

But for someone imported at the whim of a plantation owner, family history might be a complete blank despite the incredibly strong tribal roots that many people will have been torn from. In that perspective, the search for identity becomes much more important and Solomon portrays this very well.

While the storyline is not entirely straightforward, the novel is moving and Macon is a very tangible character. This might sound a strange thing to say about a character. But, if you’ve never read Morrison before, you won’t be familiar with her tendency to write settings and characters that can feel as tangible as air (see Beloved for more).

Nevertheless, for all that the newbie to Morrison will find to hold on to here, you’ll still have to deal with some elements of magic-realism and transcendence of what we might term reality. For those forcibly ripped from their homelands though, it’s entirely appropriate that reality is best described intangibly.