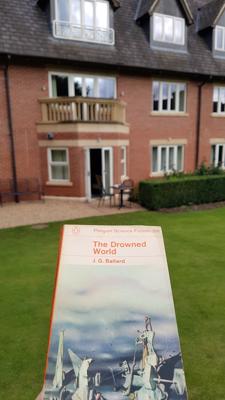 Context: Friends treated us to a lovely weekend at a gorgeous spa hotel while I was reading this.

As one of Ballard’s early works, this is pretty readable, esp. if you’ve ever tried the atrocious witterings of the likes of Crash. It’s sci-fi, and the basic premise is that the temperature of the world has risen so much the equatorial regions of the world have become unihabitable swamps flooded by the entirely melted polar regions to which the population has now retreated.

The primordial landscape becomes the setting for our narrative of competing factions pitted not only against the physical environment but, of more consequence it seems, the mental strain of living in such climatic extremes.

This latter pressure very much gives the novel a Heart-of-Darkness feel. Madness isn’t far away from anyone as their dreams are haunted by visions of being enveloped by heat or water or both and their daylight (and there’s a lot of that) seems an undending nightmare from which there is no relief.

This results in characters subject to some kind of reverse evolution whereby they find themselves unable to resist urges to strip themselves of every vestige of humanity, abandon community and launch themselves off into the annihilation of the endless wastes.

Ballard raises a lot of questions exploring what this means about humanity and our role in nature. There’s no hierarchy. It’s a symbiosis. While it’s our power over the environment that has destroyed the balance of the planet’s ecosystems, at the same time humanity finds itself unable to exert any power at all in the resulting ecosystem.

Continued global warming and rising sea levels have lent the 1962 novel even greater prescience than when it was first published. It strikes me that it should be more widely known because of this.

But then it strikes me daily that despite the rhetoric no one actually gives a toss.

I see friends and family around me continuing to buy single-use plastic drinks bottles and takeaway containers in the face of clear alternatives. I hear people’s plans to take absolutely unnecessary transcontinental flights when things open up again. I continue to pull plastic out of the sand on the beach where I live, plastic that comes directly from the shops on the sea front selling complete shit no one needs.

And if you’re more angered that I used the word ‘shit’ than by my description of our needlessly selfish behaviour, I’m writing this for you.

If we’re not bothering with all the evidence we’re presented with, Ballard’s fiction might well become fact. And having read quite a bit of him, a world in which Ballard’s fiction is fact is not one I want to live in any longer.