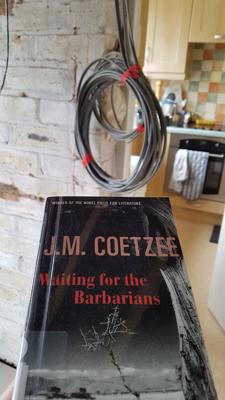 Context: Read this on the day that we had electricians install wiring to our new extension.

A clear indictment of all nations built on colonial ambition but more broadly the propensity within all of us to characterise and brutalise The Other, Coetzee’s novel pulls no punches.

An anonymous magistrate rules over a small outpost on the edge of the frontier. His political placidity is disturbed by envoys from the capital who bring with them rumours of a Barbarian uprising, rumours he feels are being fomented as an excuse for a roundup. He’s not wrong.

The novel falls into two halves. The first tells of the magistrate’s management of the settlement in the face of outside interference. In particular it details his relationship with one particular indigenous woman.

This relationship is a the wider parable in microcosm. The two find their are mutually incomprehensible. One is all powerful, the other crippled and blinded. Attempts at intimacy are one-sided. The solution to all of this is, again, unilateral and it is at this point the book pivots.

The second half sees the magistrate in a very different position from the first. There’s less pschology going on here between reader and writer, I felt as the writing became more matter of fact. The ending is ambiguous and leaves the reader to make their own conclusions about what they have witnessed and what might yet come to pass.

Coetzee’s writing is sparse and perfectly suited to this novel. It doesn’t have the immediacy of Disgrace, and falls far short of the vast ephemeral beauty and tragedy of Islands. But if you’re having trouble getting hold of Islands, this will whet your appetite while you’re waiting.