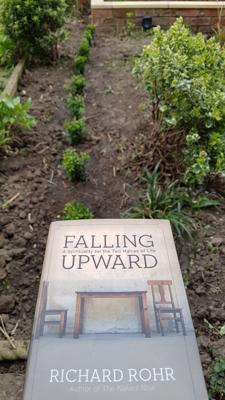 Caption: Planted a box hedge in our garden while reading this.

Not a man I’ll read any more of, but this one was recommended to me by some friends and none other than my wife so I wasn’t about to refuse them. I’ll get the review of the book done first before I turn to a review of Rohr himself and why I’ll not read anymore of his stuff.

The basic premise in Falling is that life is like a box of chocolates game of two halves. The first half, which we all experience, is spent building the structures that allow us to determine who we are – and by ‘we’ he means most of us. We learn, we take on some kind of profession, we start a family, we establish ourselves in the world.

At this point, most of us, according to Rohr, settle for this as being the aim of our existence. But it is not. There is a door to another world, the world of the red pill, the world of reality.

However, as with the red pill, this door is a crisis. Rohr argues cogently that it has to be a crisis because to leave the first half of life is to move on from the security that you have built for yourself and the identity that you have forged and to step out into the unknown.

Rohr is, as I am, a man of faith. However, whereas my faith has been and always will be fixed firmly on the sole purpose of knowing Jesus, I’m sure that Rohr would agree when I say that the aim of his faith is a moving target. Consequently, faith is where the waters get muddied in Falling.

Although Rohr does refer to Biblical characters to illustrate his life of two halves metaphor, it was hard to see if there was any distinction in his mind between what is commonly called conversion and a crisis that forms part of our walk with Jesus after we have first met him. Not least because Jesus’ own life features as one illustration of this, perhaps in some Last Temptation of Christ kind of way.

But, for simplicity’s sake, take the Apostle Paul, for example. On p. 67, Rohr refers to Paul’s conversion as his crisis. He reinforces this idea as he leads up to this description by saying

Spiritually speaking, you will be, you must be, led to the edge of your own private resources. At that point you will stumble over a necessary stumbing stone, as Isaiah calls it…

No reference to the book of Isaiah is given, but those familiar with Isaiah chapter 8 will know that the reference is to God himself and, as Paul explains in Romans chapter 9, this is none other than Jesus.

Does he mean that an encounter with Christ is the door between the first and second halves of life? If so, there are two problems with this. Firstly, some encounter Jesus and have their entire world reshaped before they have fashioned their first half. Secondly, others have their world reshaped again long after meeting Jesus. I don’t think I’m a unique example of this.

At the age of 21, when I had a miserably poor grasp on the world or my identity, I had an encounter with the living Christ that changed me literally overnight. It changed me so radically that I woke up the next morning uncertain about leaving the house knowing that everything I had been was gone forever.

But over 20 years later, I found myself at another crisis. Divorce is not an easy thing, and mine was not quick. From the time of my first being aware of the cracks in our marriage and my decree absolute, more than five years rolled by. And they rolled with excuciating slowness; imagine a steam roller moving over your body at one millimetre a week.

I have come out the other side of that into a life I barely recognise internally or externally. I bear almost no resemblance to the person I was prior to it. Now, does my life have three halves or have I confused one of these two crises for what Rohr writes of? Rohr goes to some lengths to clarify what the second half of life looks like, and I recognise discoveries of elements of it through both of my major life crises. Perhaps I’ve strained the metaphor.

Also strained at times are scriptural references. Halfway through, Rohr refers to Paul’s declaration to the Colossian church that our lives are ‘hidden with Christ in God’ (Colossians 3:3). Except that Rohr writes his biblical quotation exactly like this

hidden [with Christ] in God

What can he mean by his use of square brackets? Can he mean that “with Christ” is somehow optional? Can he mean that “with Christ” is interchangeable with whatever we choose to place there? Tragically, he never clarifies his seemingly pointed and yet also seemingly frivolous use of punctuation here. It is tragic because Jesus himself claimed that it is of eternal significance (see John 10:9 for just one of many examples).

Glimpses of what Rohr may believe are seen here and there, though.

I quote Jesus because I consider him to be the spiritual authority of the Western world, whether we follow him or not.

The additional phrase “of the Western world” is telling, but the “whether we follow him or not” seems confusing to me. You can’t on the one hand consider someone “the spiritual authority” [his emphasis] and then not follow him. But in his use of the inclusive pronoun “we” this is what Rohr seems to be suggesting he is able to do.

Every time God forgives us, God is saying that God’s own rules do not matter as much as the relationship that God wants to create with us.

But every instance of God’s forgiveness, from Genesis 3 to Revelation 21 is entirely dependent on Him upholding the rules He Himself has established (see Matthew 5:17). In a world where “God’s own rules do not matter” there is no measuring stick against which to gauge his love for us.

In fairness, I should say that the discerning reader is going to find much that is worthwhile here. I’ll remember this for the rest of my days and have resolved to adopt it:

I have prayed for years for one good humilation a day, and then I must watch my reaction to it.

He includes the reference Matthew 13:30 but only quotes the first half of the verse. It’s hard not to think he did this because the verse ends in a less “inclusionary” way than he is comfortable with:

At that time I will tell the harvesters: First collect the weeds and tie them in bundles to be burned; then gather the wheat and bring it into my barn.

For an author whose entire work rests on a metaphor of two halves there’s a certain irony in him quoting only the first half of a verse.

Towards the end of the book he says

God will always give you exactly what you truly want and desire. So make sure you desire, desire deeply, desire yourself, desire God…

What kind of earthly fathers always give their children exactly what they truly want and desire? Bad fathers, I’d suggest. That’s not to mention that you can either desire yourself or desire God. But in a quote so powerful that all four Gospel writers record it and Matthrew more than once, Jesus said

Those who try to gain their own life will lose it; but those who lose their life for my sake will gain it.

Now that to me seems a much more succinct formula for a second half of life worth experiencing.