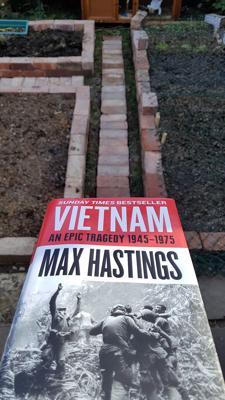 Context: Finished this on the day that I finished building paths of brick between the veg beds I’ve built in the back garden.

It’s hard to know where to start with the Vietnam War such was the lengthy prelude that the people of that nation were subjected to by the French and Japanese. Hastings does a good job of picking up exactly where he should at the end of WW2 where the hopes and promises of independence for Vietnam were dashed. It would be the first of many betrayals by us in the west.

By the time the US are in too deep, you are gripped by the unutterable misery that pride and political idocy can wreak on the world. We’re still suffering the aftershocks of what was a mistake of titanic proportions.

This is a large and well-researched book. If anything, I’m surprised that Hastings managed to get everything into 650 pages. This is the only criticism I’d make. The book could have done with many more detailed descriptions of episodes like the unbelievably awful fire on the USS Forrestal in 1967. The war, like any war, is a collection of individual experiences and Hastings doesn’t really do these justice. I’d have been more than happy for this to be the first of at least two volumes.

Instead, we have a very thorough sweep of 30 critical years of history. You get a very good idea of the motivations of the USAnians and, as with Bury My Heart at Wounded Knee, the hideous self-interest of the political leadership and their willingness to slaughter anyone in their path is laid bare. It’s blatantly obvious that nothing had changed in 200 years. With Iraq and Afghanistan, it’s obvious that Vietnam didn’t change things either.

Hastings is even-handed in his treatment of both sides of the story, especially considering the relative paucity of data from the North, and for this he is to be commended more than the recent Ken Burns and Lynn Novick documentary which has far too many eulogies for the USAnians who died but gives very brief if nonexistent biographies of those who died repelling their occupation.

How anyone can actually believe that the USA is the bastion of democracy and the leader of the free world after reading the truth about the blood this nation has on its hands and for which no one has been held accountable and not one official apology uttered is beyond me.

There aren’t many who are fans of the Northern regime which achieved its aim through the slaughter of unknown numbers of its own people and subsequently boasted of liberating the southern population who it then imprisoned in huge numbers. But at least they had a freedom to fight for.

If the US had truly honoured the words of its national anthem, it would not have quashed a democratic independence movement and attempted to impose a military dictatorship of its own creation on the people of another nation. That it did shows that its entire political system is a farce. That over 50,000 of its own citizens died for it shows how strongly people still believe that farce is a truth.