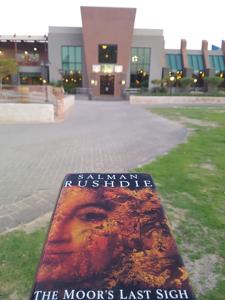 Context: Last meal at Tandoori House while reading this.

Started out alright but Rushdie can’t seem to just sit still and be a good boy. No sooner have you got settled then he’s up and off on some mad caper with some outlandish characterisation, blurred reality and has you out on a boat in a stormy sea of symbolism laden.

And while you vomit over the side and try to catch a glimpse of the stability of land somewhere on the horizon, he relates a tale of Moraes, a child strangely deformed born into a wealthy family involved in the southern Indian spice trade.

As you push off from the shore into a calm sea, his tale of family rivalries in trade and love keep you highly entertained for a good third of the novel. As soon as the focus shifts to the narrator himself as the family moves to Mumbai, the billows start to roll and you quickly lose your bearings.

Rather than actually being written by him, it’s almost as if the novel has been infected with Rushdie at about this point and finds that it can’t recover. The narrative starts to make less and less sense, characters do ever more strange things, and one by one your ideas about what is worth taking note of are challenged for, it seems, no good reason.

For example, Moraes is a Benjamin Button-esque child who, you are told, ages at twice the rate he should. Initially I thought this was going to be used to set up some kind of conflict for him later on in life. But it seems Rushdie had this mad idea one morning and, by week three of his writing sessions, had forgotten all about it. I had no idea why he would do this.

At times, the writing is clever, but these episodes are so few and far between they aren’t enough to nourish you on your journey. You get very much to the point where you wish it was all over. Sadly, this doesn’t coincide with the actual end of the novel.

Compared to his classics, this novel was, for me, a major disappointment with no purpose that I could discern.