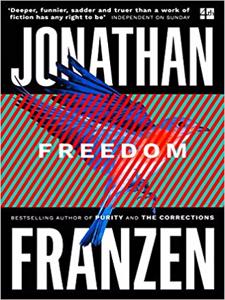 Context: Wandered round Al Khobar for a final farewell to old haunts before leaving Saudi forever.

As with Franzen’s other novels, everyone’s got hangups and skeletons in the closet and he spends the novel dragging these out into the light while the characters kick and scream.

This differs from The Corrections, at least, in that it does all go a bit saccharine at the end. Tying up all the loose ends does seem to me to clash quite a bit with the gritty reality of characters dealing with lives that are less than perfect.

The novel jumps around an awful lot. If you’re not paying attention, you will get lost fast which, in a long book, isn’t helpful. So, hold on tight and keep your hands inside the car.

There’s a fairly tight narrative surrounding a woman called Patty who grows up suffering from the human condition which is compounded by a sexual assault. This results in polar opposite responses from her parents and she never really recovers from the effects of all this.

The point of the novel is that we’re all messed up. I first came across him making this POV 12 years ago when I read Corrections, but, as then, there’s no counterplot to this narrative. The only evolution of his theory that I can discern is that we’re not only doomed personally and interpersonally, but also environmentally too. Yippee.

If you’re into schadenfreude and like to pull the lace curtains back to see what the neighbours are doing, you’ll love this novel. If, on the other hand, you like to get involved in the lives of the broken and see them healed, you’ll have to look beyond Franzen for inspiration. As I suggested back in my Corrections review, only Christ can give you the counternarrative of hope that novels like the ironically-titled Freedom fail to deliver.