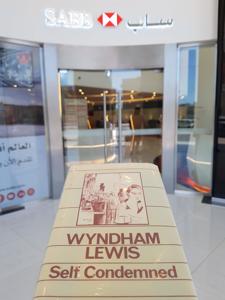 Context: Saudi bank screwed up transferring my remaining cash to the UK while I was reading this. Very stressful!

To a certain extent autobiographical, this again, as with The Driver’s Seat, is about someone making their own decisions. This resonated with me as Professor Rene Harding resigns from his job which coincided with me resigning from mine. We also both worked in education.

However, while he pursues this course of action very much against the advice and wishes of his wife, I had the full support of mine. This comes back to bite him after he emigrates from the UK to Canada and his marriage starts to show cracks from cross-cultural strains.

The Canada of Self Condemned is always miserable, always cold and has no redeeming features whatsoever. In addition, Prof Harding’s own life starts to grow very familiar as all the things he has run from gradually find him out in his new surroundings.

It reminded me of a quote from a song I used to sing:

Having lived overseas as a child and then for 20 of my adult years, I can tell you firsthand that emigration is often spurred by the misplaced thought that life won’t be as troublesome in our new home. But as we said in Saudi, “Whatever you are, Saudi makes it worse.”

Lewis’ morality tale is well written. There are a couple of tragic events that are very well described. However, every now and then, there’s a Rand-ish rant on some aspect of intellectualism. It’s an OK novel, but I don’t think it’s in any way deserving of its place on the 1001 Books list. I mean, how influential can it be if it doesn’t even have its own Wikipedia entry? Come on now.