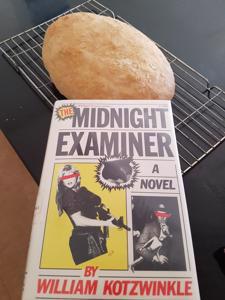 Context: Mrs Arukiyomi stunned me with some amazing bread while I was reading this.

Kotwinkle is probably more famous for writing E.T., not this, and it’s hard to see why this needs to be read by anyone before they die. This is a shame because he did not in fact actually create E.T., he simply wrote the novel after the screenplay was written by Melissa Mathison. Anyway, I digress …

Not as talented as either Wallace (Infinite Jest) or Vonnegut (Slaughterhouse Five, Breakfast of Champions), Kotzwinkle seems to be trying to match both in this tale of a group of correspondents for a mediocre tabloid in New York. We can at least be thankful that he mirrors Vonnegut and not Wallace in terms of length, and that he’s easy to read. He isn’t a patch on either of them as a satirist, though.

The staff of The Midnight Examiner get involved with a local gangster and their lives start to resemble the fake headlines they generate in their day jobs. It’s picaresque and satirical but it’s not going to be anyone’s fave read, and it’s not really going to ever provide much to the world for posterity.

Kotzwinkle has a sense of humour, but it’s definitely not my sense of humour. Judging by reviews online, his humour seems to appeal to a fairly narrow band of humanity. If you’ve got nothing better to do, you might want to see if you fit in this narrow band. Otherwise, you can leave this one by the wayside.