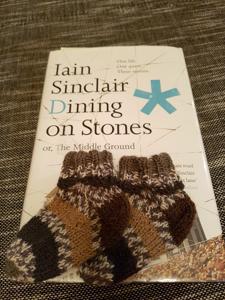 Context: Mrs Arukiyomi knitted a pair of socks for our newest nephew while I was reading this.

You know you’re in for a rough ride when the book your about to read is recommended by the lamentable Will Self.

When everything else fails, fall back on doctored autobiography.

While this is ostensibly one of the musings of our protagonist, I believe this also provides us with an insight into exactly what Sinclair has done here.

Basically, Sinclair wandered the Ballardian wastes of Essex, came up with nothing worthwhile for a novel and then just decided to write what happened to him instead. Sadly for us, that was pretty much nothing.

One of the worst novels you’ll read in a good many years. For some reason, Sinclair (and apparently his publisher) thinks that he can write a novel.

Characters, plot, development… forget all that. They’re far too mundane for the great Sinclair. How anyone edited this is beyond me. Single. Word. Sentences. Abound.

Come now, I hear those of you who haven’t yet read it argue, many classic experimental novels lack the traditional ingredients for a novel. That is true.

But in the same way that I could make an experimental cake by substiting sperm, talc and tangerines for butter, flour and eggs, it would hardly be considered worthy of consumption by anyone except the most brown-nosed of my diners. It’s almost as if the title is a metaphor for what his readers will go through.

In an era which churns out more novels each month than the entire 18th century managed, surely there’s more need than ever for a title to justify its existence. Perhaps Stones does that by aiming to be the worst novel ever published.

He not only picks what is arguably the ugliest part of Britain to write about, he writes about it in prose that is barely recognisable as lucid. If you want to tell me that that is precisely the point, then fair play to you, but the resulting mess isn’t worth anyone’s time at all.

Next post: 0668 | The Engineer of Human Souls | Josef Skvorecky