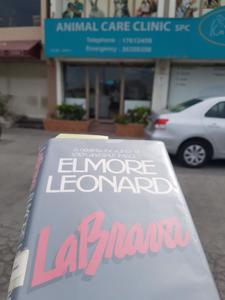 Context: Took the cats for their final medical stuff prior to export while reading this.

If you like hard-boiled detective stuff, this is for you. Leonard even throws in a faded 1950s movie star so you get a bit of film noir along the way.

Halfway through, there’s a twist which isn’t entirely unforeseeable, and it all reads pretty well. While it is a novel that very accurately captures its era, this in many respects is a shame.

For these reasons, I didn’t find it too pleasant a read and the novel will not age well. Having read this and City Primeval, I’m not sure that Leonard, like Tartt, has more than one novel to write. It’s not a novel I need to read more than twice and I won’t be expanding my literary horizons with more of his oeuvre.