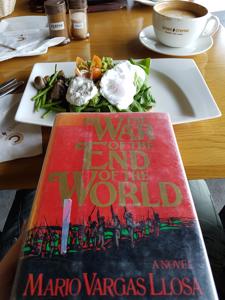 Context: Went out for a final breakfast at our favourite coffee shop in Bahrain while reading this.

A very good long read which has all the intensity of the most roasted Brazilian coffee you can imagine. There’s a lot of conflict here so steer clear if you’re not up for that.

Based on the true story of a hinterland rebellion in northeastern Brazil in the late 19th century known now as the War of Canudos. The coming millenium leads to the formation of a messianic cult formed almost entirely of peasants who form an early version of Occupy to form their own society building their own town of Canudos.

In the eyes of the government, doing anything they didn’t sanction invited the only solution governments understand: crush the people at all costs. And the cost is high, on both sides. This leads, ultimately to a major tragedy which should never have happened.

Vargas Llosa is, for me, unique in that he’s the only writer based south of San Diego that I can read with ease. For some reason, writers from South / Latin America seems to write in such a tortured enigmatic fashion that you wonder if they do this simply to obscure the fact that they really don’t have much of anything noteworthy to say.

Coelho, Allende, Bolano, Garcia Marquez, Paz – all of these have brought their offerings and received a Cain-like rebuke from me. Even Borges, while he may have much worthile to say, doesn’t half do a song and dance to get there.

But pick up this book and you are captivated from the start. The characterisation is vivid and vast and that includes the unforgiving landscape. The events that unfold are woven back and forth sometimes chronologically, sometimes not, like a baker kneading the dough of some fabulous bread.

But, as you discover early on, this bread will stick in the throat. As a reader you are disturbed throughout. The ending is particularly bitter.

The handling of the crisis shows that almost nothing has changed in the intervening century and a half. Aung San Suu Kyi, Assad, Mohammed bin Salman, King Hamad bin Isa Al Khalifa have all led brutal acts of oppression against their own citizens which are very selectively condemned by our own governments.