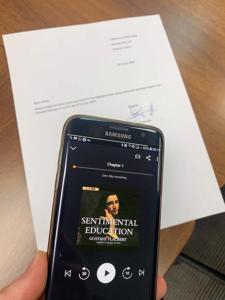 Context: Was listening to this when I handed in my letter of resignation from Saudi Aramco.

The story of youth, this is a great example of how someone acts when they grow up simply with the morality given to them by the society they emerge from. It’s a tale not how a character remains true to values that are immovable but rather subject to the vicissitudes of emotion, lust and the winds of circumstance.

As such, I think our protagonist Frederic is to be pitied. He has no understanding of values such as loyalties or real love. The writing brilliantly characterises Frederic. He’s someone to whom every reader to some extent will relate.

But the fact that, in the end, his most treasured memory is that of a visit to a brothel pretty much sums up his life. As with Bel Ami, which it must have influenced, the man has lived solely for his loins.

The novel clearly describes contemporary Parisian society with its hypocrises and hedonism and is very well written, and it’s rightly a classic in describing an era that was a turning point for an entire nation.

The swollen bellies of the likes of Frederic would soon prompt a revolution to define all revolutions and Flaubert was setting out to do the same for literature. Traces of this can be seen all over French literature; I saw Germinal everywhere.