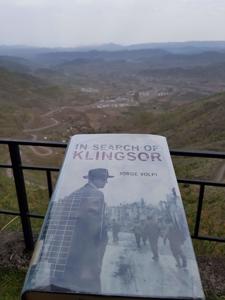 Context: Read this while staying in a hotel with this amazing view at Lalibela, Ethiopia.

Badly written, badly translated, badly edited, this should never in a million years have made it onto the 1001 Books list. Writing in the 2008 edition of 1001 Books You Must Read Before You Die, Oscar Rickett says the novel “moves on at a pace that allows for the development of the mystery.” Garbage. The mystery is about as hidden as a blancmange in a boxing ring. Mind you, I doubt Oscar Rickett’s view is too worthy of consideration. His bio in 1001 Books describes him as a “freelance writer and amateur clarinetist.”

You need look no further than the table of contents to find issues with this book. The page numbers bear no relation to the subsequent chapters. Further issues crop up regularly. For example, on page 43, a guy starts eating mushroom “vol au vents” before continuing to eat “mushroom sandwiches.”

But while the editor and translator bear some responsibility for this wreck, the bulk of the blame lies squarely with Volpi. The first hint that he might struggle with creative writing comes right off the bat with the choice of the name Francis Bacon for his protagonist. At this point, you’re holding hope that this is somehow symbolic. Will there be allusions to art, to philosophy? Er… no.

After Bacon inevitably gets involved with an obvious honeytrap, there’s a ludicrous piece of writing that literally goes like this

“Tell me what you do together”, Irene said as she took Bacon’s member into her hands, “What are you investigating?”

After he’s spilled the beans (no euphemism), the wordcraft continues

“I think it’s fascinating,” she whispered and, in place of her hands, her head travelled down along her lover’s body until her lips found themselves hovering upon Frank’s impatient penis

Bacon sets out to discover the identity of Klingsor, a pseudonym for the scientist who controlled the Nazi nuclear programme. Along the way, he tracks down and interviews scientist after scientist with each interview demonstrating a wild array of questions many of which have no relevance to anything I could think of.

The book (or maybe the writer) suffers from schizophrenia. On the one hand Volpi wants to incorporate historical events such as (inexplicably) the 1944 attempt on Hitler’s life and every 1930s-40s nuclear scientist you can think of while on the other he attempts (and fails) to weave into this mess some kind of mystery.

In the end, you just don’t care who the eponymous Klingsor is. The novel drags so much that if you hitched it to the back of Hamilton’s Formula 1 car he wouldn’t finish a lap.

What Volpi has done here is utterly embarrassing. If you are at all interested in the historical events he touches on, do yourself a favour, avoid this and pick up a book from the wide array of relevant non-fiction by authors who can actually write.

Previous post: 0650 | One, No One and One Hundred Thousand | Luigi Pirandello