0650 | One, No One and One Hundred Thousand | Luigi Pirandello 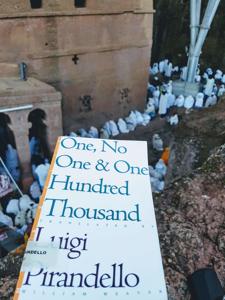 Context: Read this while visiting the stone cut churches of Lalibela, Ethiopia

Started out a bit Kafka-esque but then didn’t really go anywhere. Maybe that’s the point. It took Pirandello 15 years to write it which equates to just over 10 pages a year. Maybe that’s why.

Vitangelo’s wife tells him that his nose isn’t exactly centred and this off-the-cuff comment sends him into a metaphysical spiral. Questioning first his assymetrical nose in the mirror, he starts to question the truth of his own reflection, eventually disappearing up his own bum in pursuit of some form of reality.

The title refers to him being one person but really no one because no one really knows who he is but then he’s one hundred thousand because so many are like him. Whatever.

Quite deservedly, his life falls apart as he abandons everything to his quest. He loses his job, his wife, his friends and, according to everyone else, his sanity, ending up in Dostoevskian poverty.

I was left not quite knowing what I was supposed to take away. My nose is crooked anyway so I guess I’m safe.