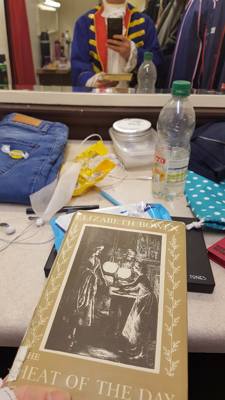 Context: Read this while acting in the local pantomime.

On the inside cover of this, it says, “The texture of her prose has a gossamer exquisiteness…” Well, here’s an example of what passed for gossamer in the age of rationing when this was first published:

She went ahead of him through another door to put the cat down; while he had, owing to the unfamiliarity of this other, no less minute, hall, a renewal of difficulty over the old business of putting down his hat

Not exactly silky smooth is it?

Bowen’s book has probably only survived for posterity because it is one of the very few novels that is set in the London of WW2. As such, it evokes a time when the nation of Britain was struggling with its own identity.

The characters of Heat also struggle (as does the reader) with their identities. We meet Louie in Chapter One and bump into her continuously throughout. In fact, the novel ends with her. But you’d be wrong if you thought that she had any role at all to play in what one could ostensibly call ‘the plot.’

Bowen is verbose and likes the sound of the scratch of her own quill. There’s the basis for a thriller here, but there are absolutely no thrills to be had. If there’s any real skill here, it’s that Bowen takes the story of a woman who finds herself in a relationship with a man selling secrets to the enemy and manages to make it utterly boring.

Personally, I found the insight A Dance to the Music of Time gave me into wartime London more engaging.