0682 | Towards a Philosophy of Photography | Vilem Flusser 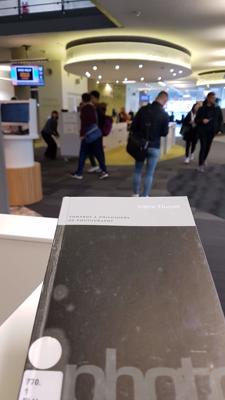 Context: This was the first book I took out of Teesside University Library as I began a photography Master’s.

If you have to study photography as I currently do, you need to think about it. Flusser aims to provide enough to get us started, and like all philosophies, it’s intended to just be a starting point. For that, it does okay although, having been published in 1983, it felt dated in parts.

Part of the reason it hasn’t aged as well as it could have is that Flusser draws on the technology of his day to frame his ideas. So, we have talk of apparatuses and other mechanical devices.

This doesn’t stop the reader following his arguments however. We can still easily understand the idea of the camera as a ‘black box’ which the user cannot have complete control over. In fact, with the advances in technology, this idea is even more salient that it was forty years ago and will only become more so.

The fact that the book is dated is perhaps more of an issue for the philosophical ideas themselves. Flusser questions whether the photographer is subservient to the agendas of the photographic program which he describes as the entire industry of photography.

There’s such a clear link between this thinking and the ideas that were ruling his native Czechoslovakia at the time that I feel he must be questioned. Just because there was a programme attempting to control the actions of pretty much every citizen beyond the Iron Curtain, it doesn’t necessarily mean that the photographer is subject to a similar programme.

Photographers are as subject to techinical confinement as any other artist and, I believe they always have been. Michaelangelo got the Sistine Chapel ceiling done successfully because he understood how to use the available technology. He didn’t need to fully understand the physics involved in pigments and plaster, only enough to get the job done.

Where he is spot on is in saying that the photograph needs to be acknowledged as a technological advance with the same impact on society as writing or the wheel. I don’t think we’ve even begun to come to terms its impact and everyone just seems to take it for granted. To do so seems to me to be an incredibly dangerous act of moral naivety which will cost us in the future if it hasn’t already done so.

Flusser gives up after fewer than 100 pages so you can be forgiven for finishing it frustrated. Take comfort in the fact that it’s just a starting point. His ideas are still worthy of discussion today, but I don’t think they should be taken without question. In answering the questions he causes us to ask, we will form our own philosophies that will serve our own purposes.