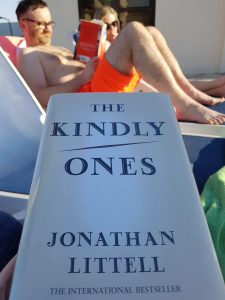 Context: Was reading this when some dear friends came to visit us in Bahrain.

Littell’s meticulously researched memoir of an SS officer is a book that no one who reads it can ever forget, and that’s exactly how it should be. It’s absolutely horrific, chilling from the introduction. Here, you get your first glimpse of the incisive analysis the protagonist Maximilien Aue brings to his involvement in the Final Solution when he says

There was a lot of talk, after the war, in trying to explain what happened, about inhumanity. But I am sorry, there is no such thing as inhumanity. There is only humanity and more humanity.

The introduction is a masterpiece in itself. It begins and ends as follows:

Oh my human brothers, let me tell you how it happened. I am not your brother, you’ll retort, and I don’t want to know…

And you know what? He’s right:

If you were born in a country or at a time not only when nobody comes to kill your wife and your children, but also nobody comes to ask you to kill the wives and children of others, then render thanks to God and go in peace. But always keep this thought in mind: you might be luckier than I, but you’re not a better person.

You don’t come lightly to any book that spans nearly 1,000 pages has relatively few paragraphs and absolutely no speech punctuation. Neither should you come to any that deal with the sharp end of Nazi atrocities lightly either. The Kindly Ones is a book to be taken very, very seriously.

What we find here is what happens to a victim of circumstance, privilege (if you can call it that) and place. The descent into the abyss is so subtle at first that you hardly notice the gradient. Any desire of Max to climb back to the safety of morality comes far too vertiginously late. There is no way out.

The most profound impact the book made on me was the casting of the Final Solution as a completely bureacratic exercise, not a working out of an ideology. Being presented as simply an administrative task to complete does not mean that moral and ethical dilemmas aren’t present. They dog Max throughout.

As he struggles for breath in his moral vacuum, there are increasingly frequent episodes of the bizzare. Rather than accept these as factual, I took them to be a product of Max’s strengthening delusions. As things get more desperate, his narration becomes less and less reliable.

Having blurred the lines between moral absolutes, the boundary between the real and the imagined starts to splinter culminating in an outlandish denouement. This, our narrator complains, no historian has ever noted. His addled mind cannot comprehend it as fantasy.

The book isn’t perfect. But it is a classic example of how the novel can force you to confront very, very big questions you’d rather ignore and bring you face to face with what we are all really like. It’s uncomfortable to read and it’s entirely necessary that we do so.