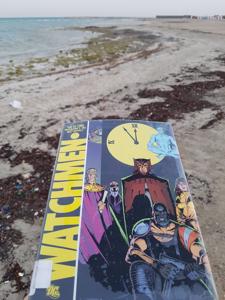 Context: Read this while I took part in filming for a video about plastic pollution on a beach in Bahrain.

Before the mid-1980s, superheroes were pretty simple. They had special powers, they fought baddies, they fought on our side, and they won. Wathmen changed all that.

Moore single-handedly deconstructed the character of the superhero with a comic that presents its characters as flawed beings who are as complex as they are capable of superhuman feats.

Moore’s characters can be corrupted, they know fear, they can be jealous, they can be hurt and not just physically, and they can overcome all this and be noble.

Throw in a complex, compelling narrative that weaves in earlier material in only the subtle ways comics can and you have a book you will want to take your time over.

There are layers of genius within the genius here. Mostly so through the comic within a comic, read by one of the characters whose plot runs parrarel or perpendicular to the one you are reading. There’s a lot to take in if you give it your full attention.

Artist Dave Gibbons should get more credit than he does. Everyone knows Moore’s name, but only real comic fans will know Gibbons. I’d never heard of him, but realised that I was an early admirer of his work in the Judge Dredd strips I read as a young boy.

Watchmen isn’t easy to get hold of, but is very much worth the effort to track it down. I managed to find it in Saudi Arabia of all places. Clearly, the authorities had no idea it was in the Kingdom (some of the panels are far too risque even for the supposedly liberal Mohammed bin Salman to contemplate). My memories of Saudi are very mixed. Watchmen will be one of the good ones.