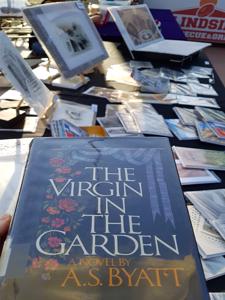 The influence of Iris Murdoch on Byatt seems to be very apparent here. Virgin reads like an intellectual’s version of Murdoch’s The Bell, written 20 years earlier, but without as strong a plot and far more musing on literature. In fact, at times you could be forgiven for wondering if Byatt was competing for the world’s longest bibliography so many references does she include.

Things Mean A Lot wrote that…

A.S. Byatt’s writing – more so in her novels than in her short stories, I think – is very much cerebral.

For me, cerebral is the perfect word. There’s really only one character I can relate to in the entire novel and that’s the only one who has subsumed his intellect with his passions: Daniel the rector. Apart from him, I wanted to stuff the rest into a string bag and drown them in a well.

Perhaps everyone in 1950s Yorkshire really was an intellectual. But I think I’m about as convinced of that as I am with Sarah Water’s attempts to persuade me that every Victorian woman was a lesbian.

And this is where I think the novel has its greatest weakness. It’s almost like Byatt was trying too hard. There are some great scenes such as Daniel and Stephanie on the beach at Filey (and what a beach that is) or Frederica getting mauled on the moors, and you have a feeling that Byatt really can write. But she can’t help but return to the arts as her safe haven from describing the realities of life.

I had a feeling that Byatt wanted us to believe that the more well-read we were, the more we’d understand life. To me, that’s the cart before the horse and the main reason why Frederica at 16 shows an equal amount of folly as the middle-aged Alexander Wedderburn.

But there’s enough in here for those who like a serious novel to enjoy. Just keep going through the rough patches and you’ll get through it. It’s not a novel that’s aged well though, and you’d be forgiven for thinking that the whole thing is just pretentious claptrap.

Context: Finished this off in my mum’s jacuzzi. REVIEW Now that Middlesex has been removed from the 2008 edition of the 1001 list, Eugenides’ work is represented by this one…

If you enjoyed this book, you’re going to love the map. REVIEW This is a profoundly moving book made all the more poignant for the era in which it was…