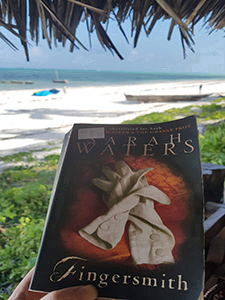 Context: Was reading this while staying on a beautiful beach in Zanzibar.

Before we’ve reached the 100th page of this, Ms Walters can’t hold it in any longer:

Maud stood very still, her pink lips parted [ooh er], her face put back, her eyes at first closed and then open and gazing at me, her cheek with a flush upon it, her throat lifted and sank as she swallowed, my hand grew wet [ooh er#2] from the damp of her breaths [ooh er #3]. I rubbed [ooh er #4] and then felt with my thumb [ooh er #5]. She swallowed again, her eyelids fluttered, and she caught my eye.

If you want to know what life is like when you can’t help but colour every one of life’s narrative with the same shade of pink, then Sarah Waters is your novelist. This is such a shame because she can actually write a fairly decent story, as I’ve said before.

This reads almost like three Dickens novels in one. Charles himself would have been proud of the number of twists (gedditt??) Waters employs. Unfortunately, they start to become what the reader expects and anyone with slightly more brain than average can see them coming. True to form, there’s a happy ending of course, just after all the baddies get their just desserts. Yawn.

Having finished my second (and last) Waters, this novel has done nothing to shake my previous impression that


all her creativity isn’t simply an elaborate means to the banal end of trying to convince me that every woman in Victorian England was a lesbian.

Could it be that Sarah Waters is attempting to use fiction to give us an alternative view of history as fact? Oh, surely not.

Previous post: 0630 | The Holder of the World | Bharati Mukherjee