0630 | The Holder of the World | Bharati Mukherjee 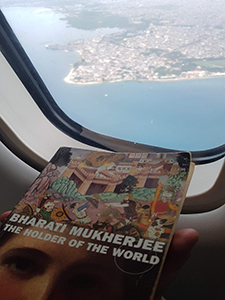 Context: Was reading this as we flew into Stone Town on my first visit to Zanzibar.

Had I not been held captive in a stifling, airless bedroom of a beach bungalow in Zanzibar by the worst sunburn I’ve ever had in my life AND a foot aching from sea urchin spines, I doubt I would have had the wherewithal to make it through this. As it was: “Thanks, Ms Mukherjee. You only added to my misery.”

Trying to do too much in a short novel is the fate of any writer who really lacks the ability to write well. If you can write prose like Alessandro Barrico, Virginia Woolf or Colm Toibin, you can easily achieve mastery of your literary mission in under 200 pages. If you’re Mukherjee, you cannot. In fact, she should not.

Having said that, I wouldn’t have wanted her to have to pull another 200 pages of printer paper off the shelf to make this one work. Her writing jumps around all over the place, can’t make up its mind if it is history of sci-fi or romance or whatever.

Having completed it, I was somewhat surprised to find that it’s supposed to be a retelling of Hawthorne’s Scarlet Letter. Quite why a novelist with the output of Hawthorne needs to be retold, I have no idea. I also had no idea while reading Holder that Mukherjee was retelling that particular narrative such was the success of the attempt. Simply having your protagonist name her daughter Pearl is insufficient.

The prose is turgid, completely opaque at points and completely banal at others. Here’s an example of the opaque:

Before this longing, she had conceived of emptiness as absence, detectable only by the circumference within which it was contained. Now the void became a pleasure-filled pain subsuming all the old salient virtues such as duty and compassion

I’ve re-read that enough times to know that I can’t wring any more meaning than none from it. Horrendous.

And here’s an example of the banal:

Hannah shrieked, even though she didn’t know she had until she heard the shriek herself.

There are two things wrong with this. Firstly, sound travels at 343 metres per second and let’s say she has a fairly large head to give her the benefit of the doubt. That means it that the period of ignorance Mukherjee is referring to last less than half a thousandth of a second. Hardly worth referring to.

Secondly, and worse still, the subordinating conjunction “even though” implies that the shrieking happened despite her not hearing it which is meaningless at best. Whether or not you hear yourself shriek does not in any way determine whether you shriek or not.

Sadly, what Mukherjee lacks in her ability to write she also lacks in her ability to construct a coherent novel. Every single reference to a modern-day researcher of artifacts (who exactly has that job description?) and her live-in lover who is attempting a time-travel experiment could be excised from the book and it would actually improve it. It has zero relevance.

Other characters such as Hannah’s husband Gabriel or Higginbotham drift in and out of the reader’s semi-consciousness and seem to contribute little or nothing to the point of anything.

I’ve just now realised that I’m in serious danger of praising the novel by assuming there was a point to it so I’d better stop.