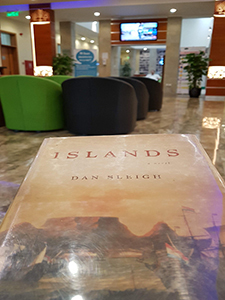 Context: Took Mrs Arukiyomi to the local hospital for a check up while reading this.

Absolutely fantastic book. Just one of those that you come across and know immediately that you’re going to end up buying someone a copy because you just want to share the wonderful experience of reading it. You’re disappointed when you reach the end which is saying something for a book which comes to over 700 pages.

I found it utterly captivating, a fantastic insight into the establishment of the Cape Colony in what is now South Africa by the Dutch in the 18th century. It’s just replete with historical detail with beautifully recreated details about clothing, society, relationships, maritime travel, industry and so much more.

It’s a historical novel; you’re not reading non-fiction here. But Sleigh, a history teacher himself, has done a wonderful job in taking historical characters who you can look up online and fleshing out their lives with details that, although imaginary, are entirely plausible given what we do know.

Sure, he’s taken some liberties here and there in creating the details of their lives, but he’s done that so well you have just enough for them to come vividly to life without it being overdone. He’s done this so well, it’s just such a beautiful read.

One of the very important aspects of his characterisation, as Christopher Hope points out in his Guardian review, is that the “great white settlers” are portrayed far more accurately as mere, and entire, mortals. Their impact on the lands they visit is as horrific as can be imagined by anyone who has read the truth portrayed in such masterpieces as Bury My Heart at Wounded Knee.

Sleigh’s prose is beautifully matched to his subject. I read a review online where someone was saying that the prose was difficult and slow, and I had to comment and say that the reader didn’t understand the purpose of the prose. It’s perfectly paced to the point where it contributes to the very story that’s being told.

In this, it reminded me strongly of two other superb novels, namely Growth of the Soil and, even longer than Islands, Kristen Lavransdatter. But while the writers of those novels won Nobel prizes, Sleigh and Islands were completely unknown to me. It’s a great shame that neither his writing nor this novel in particular is not more widely known. There are a great many lessons here that we still have not yet learned.

If there’s a weakness it could be argued that it lies in the structure that Sleigh adopts. For me personally, it was a strength that the novel does not have a single voice or anyone you can point to as protagonist. Instead, those who appear at the forefront of each of the long chapters are used to show us different angles of the history.

In this way, like a mould, we can guess at who or what Sleigh’s work is forming at its center. I imagine it is the innocent people, ways of life, animals and environments which are laid to waste in the name of a desire to possess that has still not left humanity and which, in South Africa, as in many other parts of the world has left open sores which still fester.

To get some insight into the legacy of Dutch colonialism in South Africa, I watched Farmlands after I’d finished Islands. I have to say, my reading gave me more sympathy than I otherwise would have had for the black community’s demand that the whites leave Africa for the Africans. They’re visitors, at best, who have arguably overstayed their welcome and certainly behaved badly.

Next post: 0626 | Eclipse of the Crescent Moon | Geza Gardonyi