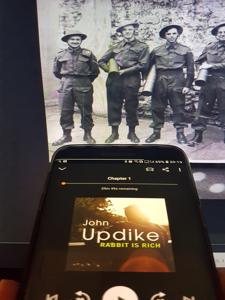 Context: Mrs Arukiyomi’s grandfather (centre) passed away while I listened to this. Private Eye readers will be glad to hear that he was 94.

More of the same from Updike with two exceptions: less happens and there’s more graphic sex. Quite why this novel, of the three Rabbit novels so far, won the most awards including the Pulitzer is beyond me.

My conclusions that Rabbit and his ilk are a complete waste of human space were confirmed by this. How many people are there out there whose lives are of no benefit to anyone except themselves and to the detriment of everyone around them?

No one in this novel is capable of loving anyone around them or even aware that they lack the ability. Instead, they carry on with facade and distortion as if life really is all about their petty concerns.

Rabbit has grown fat, in more ways than one, on the proceeds of the Toyota showroom inherited from his now deceased father-in-law. He is estranged from his son, emotionally estranged from his wife, and still beset by fantasies of the sexual grass being greener.

So, in conclusion, having read the first three books, while Updike can write great prose, he turned his skill to rendering lives that were entirely unworthy of our focus. Either there’s some genius irony there and that’s exactly the point, or these three books are equally unworthy. I think it actually may be both. 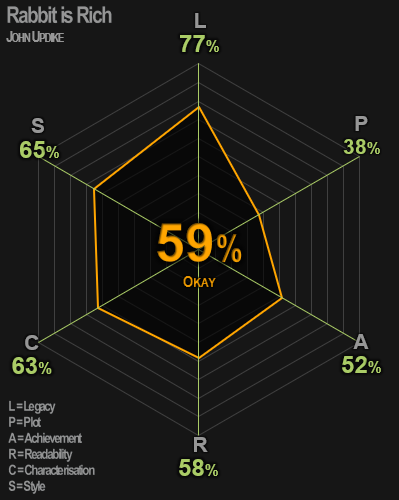