After Rabbit, Run comes this. Rabbit’s now settled down but he’s definitely not put the past behind him. He’s in a real dead end job instead of a pretend one, and the woman he felt he couldn’t face in the first book is tired of facing him and gives him some of his own medicine. His son is old enough to know but not old enough to understand.

Once she’s left him, Rabbit starts hanging out with pretty much anyone, and this results in him inviting a couple of strangers to live with him. At this point, Updike finds his philosophical muse in the character of Skeeter and the novel started to bog down a bit for me.

It all comes crashing down in misery towards the end before coming to what, for Rabbit, is something of a happy ending, i.e. mediocrity resumed.

What I became more convinced of through this novel (and the third novel only cemented my opinion) was that here we have people whose existence is entirely pointless. They fulfill no useful function in their society, love only themselves, are entirely self-absorbed, and no one misses them when they’re gone. It’s absolutely miserable.

In every nation, there are communities made up of people like this, and why Updike wrote this is beyond me, although he wrote it very well. The people who are like this won’t read it, and the ones who aren’t hardly need reminding. 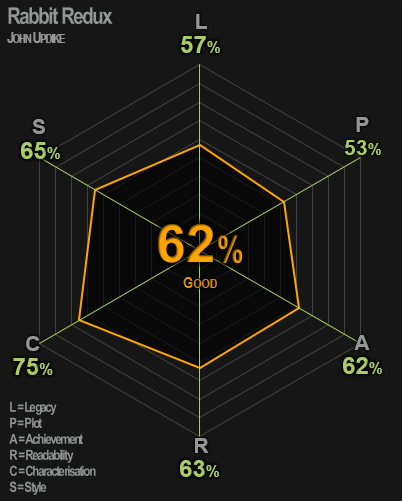 I can’t think of many novels that are as memorable as this one for its sheer audacity, its outrageous cheek, and the utter genius with which the writer sets out…

Context: Mrs Arukiyomi made some great flower decorations for her parents’ anniversary while I was reading this. REVIEW Wow wow wow wow. What an amaaaaazing book. It’s in fact the…

Context: Broke the back of this one whilst outside in the garden reading on some deceptively comfortable garden furniture. REVIEW Philip Roth’s Pulitzer prize-winning novel American Pastoral didn’t really do…