It is the mark of genius that most of the world doesn’t get what you are trying to do at all. Such is the case with Nabokov’s Pale Fire, a novel which isn’t really a novel unless you understand that novels exist only because people pushed the boundaries of an art form that, at one time, didn’t exist.

This is no easy read. You start off with a 999-line poem and then move on to a commentary on it which starts focussed and then ends up ranging into the political intrigues of a fictitious nation and an assassination. Whether any of it relates to any of it is open to question, and better minds than mine have been wrecked upon its shores.

What I do know is that I have no clue what it’s about, what Nabokov intended by it, nor what it’s place may or may not be in the literary canon. All I can say is that I read it, I thought the poem had shades of genius, and that the commentary ranged from mildly interesting to downright tedious.

I can however appreciate that it might have literary influence but just how much I’m not willing or able to say. It gets its rating solely from its audacious style and the weight of its legacy. 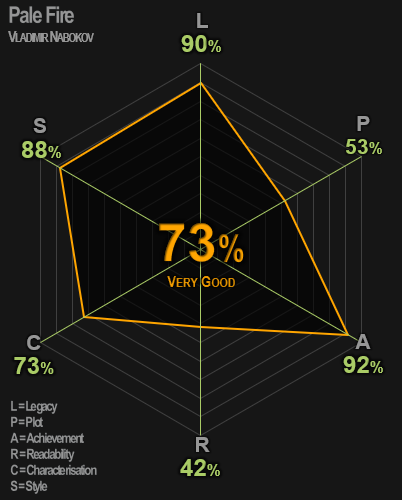 Had I not read Angela’s Ashes then this would have been unique and would have totally captivated me. But seeing as this was published just three years after Ashes, I…

Some people say this is overlong. I’m not entirely sure I agree. At the pace the novel moves at, I can’t see what might be omitted. What I will state…

Context: Read this while visiting our friends who live next to this old rail bridge on the Tyne river, Northumberland. REVIEW If you like One Hundred Years of Solitude, you’re…