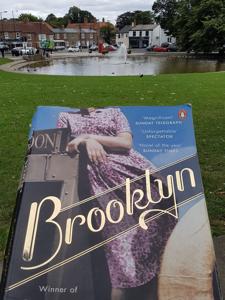 Context: Read this while property hunting near the duck pond in Norton.

Last summer’s The Master had me wanting more of Tóibín’s writing. So, this summer, I picked up a copy of Brooklyn to see if he could transport me back to the dreamlike interior of someone’s mind in the way that he had done with Henry James and Eamon Redmond in The Heather Blazing.

Not quite. I can see how this is perhaps his most popular work and why it was made into a film unlike his other works, but it doesn’t quite go as deep as the others in terms of character development. There’s more plot and less musing.

For some, this might be just what they like. Personally, I prefer to get inside the mind of someone. There’s enough in anyone’s mind to keep me occupied without anything significant actually happening in their lives. After all, it’s our minds that lend significance to anything.

Eilis leaves her older sister and widowed mother in Ireland and heads to a job a priest arranges in New York. There’s the dingy boarding house with its range of characters, most of them briefly sketched, against a backdrop of the 1950s Irish immigrant scene.

Things take a turn on meeting someone with whom she, almost reluctantly, falls in love. Thus, Tóibín sets up the crisis with which the novel ends, for me, prematurely. Although it’s written with the same understatement and soft touch I’m used to, there’s just not enough of an insight into Eilis.

If you prefer novels that are more driven by plot, this is a good introduction to Tóibín’s work. After that though, do give The Heather Blazing a go, won’t you? 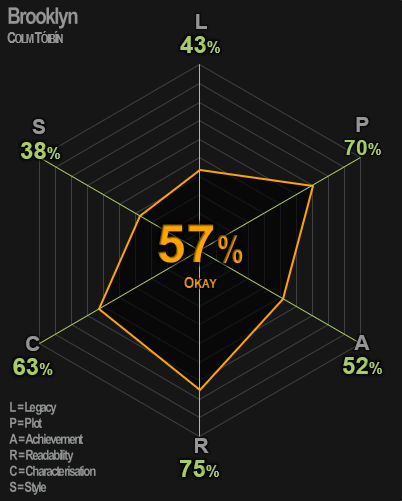