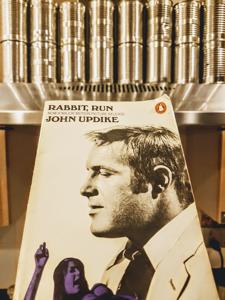 Context: Completed a wall of empty tins to stop the cats getting up above the cooker while reading this.

A long time ago in a galaxy far away, I was given a copy of Rabbit is Rich by mistake for a birthday present. I’d asked for Pulitzer Prize winning NON-fiction and received five fiction titles instead. At the time, I didn’t read fiction because no one had published 1001 Books You Must Read Before You Die. How times, and reading habits, have changed.

I digress. I got about halfway through Rabbit is Rich and it pretty much appalled me. I can’t really remember why, something to do with the sex I think, and I simply gave up and never finished it. So, it comes as a nice surprise that Rabbit, Run, the first in the series, turns out to actually be a well-crafted novel exploring the crises that occur in the minds of men who are too old to have earned a mid-life crisis.

Harry “Rabbit” Angstrom is our eponymous runner. Well, actually, he’s a basketball player. Well, he was. Now he feels trapped in a dead-end job selling useless kitchen appliances while coming home to a house which doesn’t match his ideals of home and a wife who, while she has a drinking problem (more of that later), probably wouldn’t meet his standards even if she was a teetotaller.

It’s not that Rabbit has higher standards than his peers. It’s a much more common problem for men in their early 20s. It’s that he actually doesn’t really know what he wants. This doesn’t only extend to what he wants to do with his life. It’s starts at a much more basic level like what he wants to drink in a restaurant. He’s stuck in the molasses of moribundity.

So, he runs… First in a car, then in someone else’s bed and then, greatest crisis of all, back in his very own home in what has to be one of the most memorably passages of literature I’ve ever read. In fact, just minutes before I encountered the nadir of Rabbit’s life so far, Mrs Arukiyomi asked me if the book was worth reading before turning over to go to sleep. I said it was OK.

By the morning, I said it was definitely worth a read.

Such is the power of Updike’s prose. For the most part, Updike writes Rabbit like he’s a Saul Bellow fanatic whose just finished reading Babbitt. The influence is undeniable. But, in my opinion, he’s far more accessible than Bellow while just as adept at keeping his finger on the pulse of all our insecurities. The scene that unfolded as my wife drifted off to sleep next to me was at first amusing, then pitifully sad and then gripping before finally turning to the horrific. I was drawn on inexorably with an attraction as fatal … dare I say it … as bathwater to a plug hole.

This is a novel that is definitely worth the price of entry. Let’s see how it holds up as we progress with the other two books in the trilogy of the tetralogy that is on the 1001 Books list. 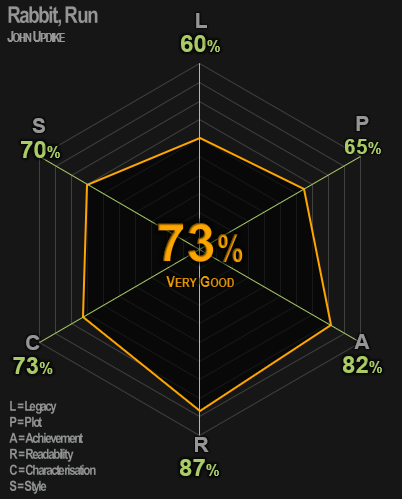