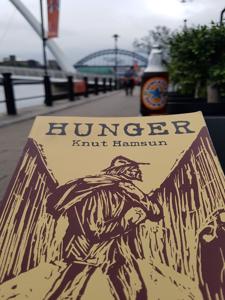 Context: Was reading this while I met a friend for drink on the Tyne this summer.

If you’ve not read Crime and Punishment, then this is a good place to start. Far, far shorter, it is nevertheless cram packed with the fevered wanderings of a protagonist whose own fate he fumbles daily. However, in Crime, although you can’t really sympathise with the motive, you can with Raskolnikov’s tortured mental outcome. In Hunger, you are constantly questioning why the narrotor doesn’t avail himself of the opportunities he obviously has to better himself.

But perhaps that’s the point. Hunger, pure persistent hunger, can reduce people to cycles of confusion and dependency that can be hard to break out of. Time and again, he’s offered a helping hand but he refuses, preferring instead to take advantage only of funds or food which aren’t, by rights, his. These only serve to add pangs of conscience to those of the stomach.

Every other character is ephemeral. None are fleshed out, and all seem phantom and dreamlike. Even the mysterious woman he names Ylajali is barely present despite her appearing repeatedly. It’s as if he’s floating through a world of ghosts.

A contempt for all is apparent throughout as, no doubt, a reflection of the contempt Hamsen himself felt against society when he himself was struggling as an impoverished author prior to his success.

Hamsen would go on to far greater literary success, particularly with Growth of the Soil. For me, there was little here that hadn’t been done before by Dostoevsky. The only difference I could really come up with, and it’s a fairly important one, is that we know for sure that Raskolnikov brought things on his own head. However, both form two parts of an important view and I can see how it has its place being the other side of the coin of poverty, so to speak. 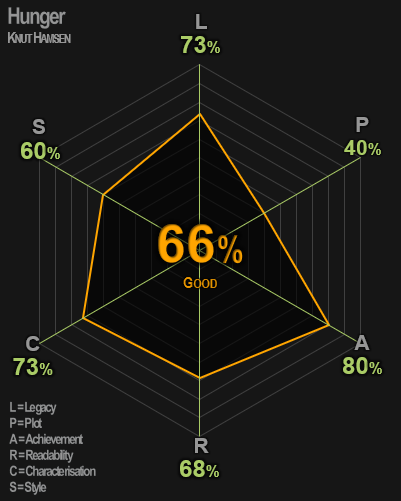