About as uplifting as digging out a mass grave, MacDonald’s portrayal of an immigrant family shattered from within by abuse isn’t going to win anyone’s most-loved novel awards. It’s memorable, and it’s, for the most part, well-written, but it’s just too close to the bone for comfort. I’m sure that’s exactly what MacDonald was intending, however.

The novel mostly traces the lives of the daughters of Irish James Piper and Lebanese Materia and is told through a series of flashbacks so that your sense of narrative is, for the most part, disjointed. This only adds to the reader’s discomfort. By the time the daughters are old enough for us to see life through their eyes, we begin to get a picture that something is not quite right. You’re never quite sure what exactly is wrong though.

Daddy James is a nasty piece of work, but you don’t really get that initially. I’ve told you up front so you can despise him and his duplicity right from the start rather than, as I did, from about halfway through when I realised what was going on.

I didn’t really enjoy this one although I could appreciate that it was well-constructed. The daughters, despite being victims, weren’t really characters I cared too much about. They either take out their emotional insecurities on themselves or their peers. There seems little hope in any of their lives. Guilt and Catholicism go hand in hand throughout, as they always do, and there’s a desperation about the whole thing which is very unsettling.

I felt MacDonald laid it on a bit thick sometimes. As if the crises of identity that abuse engenders weren’t enough, she felt obliged to also throw in a character who’s not only black and a lesbian but a transvestite to boot. You couldn’t make it up. MacDonald can. 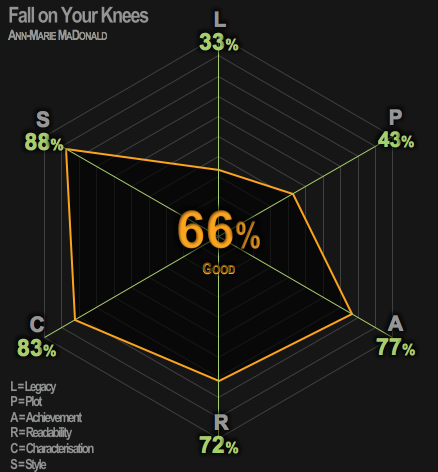 I had no idea that the world of Gormenghast existed. Quite how I managed to get to my age without ever hearing about it seems a literary crime. It, and…