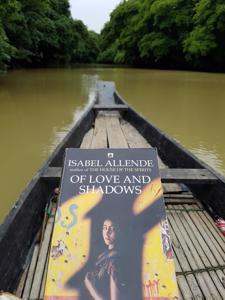 Context: was reading this in Bangladesh while I took a boat through a swamp.

While I get the fact that The Disappeared is a tragedy of epic proportions, and the world needed to sit up and notice when it was endemic in South America, to choose the medium of a shmaltzy, 1980s, Lady-Diana-hairstyle romance to portray it is just the wrong thing to do. It’s not equally tragic, but it’s somewhere on the scale.

Allende could write. For sure. I’m just not convinced, after two of her novels, that she could write well. This seems a shame for someone who apparently, according to the source of all knowledge (i.e. Wikipedia) “writes on a computer, working Monday through Saturday, 9:00 A.M. to 7:00 P.M.” If spending 84 hours a week produces the likes of this novel, then I for one am thankful she had all that time to edit. Goodness knows what state the book would have been if she’d knocked off early at 3 in the afternoon each day for a tequila.

So, there’s this country ruled by a military dictatorship but it’s a fictitious country, right? I mean, it can’t be Chile can it? Anyway, there’s this country and… no wait a minute… let’s cut the political scene and zoom in from this broad perspective to focus on one poor family struggling to survive with a husband who is a peripatetic circus entertainer (no kidding). They have a daughter who has fits. This, in the spiritual land that is South America, becomes something of a local attraction when it turns out that someone was apparently healed during one of her bouts.

Okay, let’s pan over to this couple working for a newspaper and start the shmaltz. He’s a young, handsome, intelligent photographer. She’s a young, handsome, intelligent journalist. Now, because this is post-Austen, we need some kind of reason why these two can’t get together so we can spend the rest of our efforts getting them together despite the odds (which we created in the first place.) Uhmmm… let’s see… oh yes… she’s engaged to this high up military guy (hark back to the politics) who she obediently loves without passion. See what she did there? Yep, gotta have that passion vacuum.

Right, the ingredients are prepared, let’s throw them together.

She and he head out to write a story on this epileptic girl and the military show up while she’s fitting and she kind of upsets one of them and so later gets abducted and disappears.

Having hauled ourselves up to the peak, we can now coast downhill to the finish gaining momentum all the way: investigate the disappearance, discover a cave full of bodies, risk their lives, fall out of obedience to the military guy and into a bed of passion with the photographer and then run for the hills. Sorted.

First off: a third of the novel is a waste of time. We actually don’t need to know anything at all about the girl who is abducted. In fact, it would have been more poignant had we started the book at the point of the investigation and then, like the investigators, piece together the stories of these apparently nameless corpses. Neither do we need the love story and scenes of sex in the moonlight which, quite frankly, insults the memory of the Disappeared in much the same way that a romance between investigators in the horrors of Auschwitz would denigrate the story of the victims.

More disturbing is the self-serving narrative. Allende has, from birth, been privileged, and there is little doubt that the character of Irene the journalist is based on her in some way because of the similarities in the narratives of their lives. As Irene, Allende had the wealth and connections that came with it, to flee. Those who ended up in caves of corpses did not. The tragedy of the Disappeared is that they were denied a hearing for their stories. If novelists are to deserve a voice, priority should surely be given to novelists who tell stories of the forcibly silenced. On the evidence of this novel, at least, that does not include Allende. 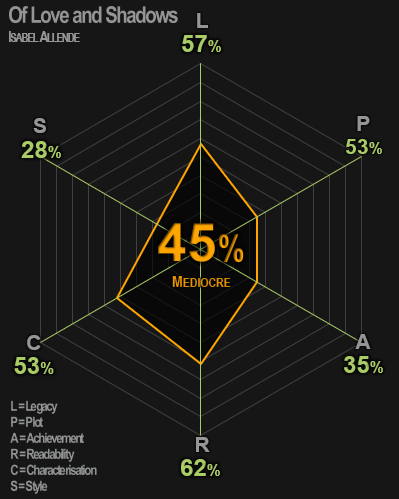