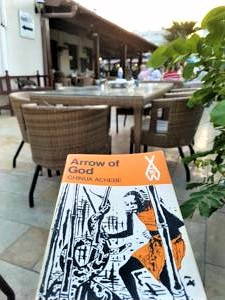 Context: read this while having dinner at the British Club. It seemed an appropriately colonial thing to do!

Not as easy to follow, Achebe’s third novel in his African Trilogy is a less straightforward narrative than his famed Things Fall Apart. Although both novels focus feature Nigerian male protagonists battling with the influence of colonialism, Things was more us versus them. With Arrow, priest Ezeulu also faces a fatal battle with his own people.

As with Things, Achebe sets up the local scene before introducing the white man. Again, this gives the (intended Western) reader time to come around to the local way of thinking and doing things, to gain some level of empathy with tradition. But by the time the white man shows his influence in Arrow, it’ll be the rare reader who feels that what might potentially be destroyed by the Imperial influence is worth hanging on to.

Achebe paints a vivid picture of tribal infighting, familial jealousies and as much disharmony as you can expect in any culture anywhere. For this, the novel is important in showing us that many a myth surrounds ideas of colonists trespassing on humanitarian idylls. Mel Gibson’s film Apocalypto did the same thing in more recent times.

And so, while Ezeulu navigates the delicate diplomatic pathways of his own people, a summons from local colonial administrator Winterbottom throws an added dimension of conflict into the mix. Misunderstandings on both sides escalate an otherwise innocuous incident, and what was intended to empower Ezeulu actually threatens to undermine him. His harsh response heralds the tragic end of the novel for Ezeulu; an end, however, which the ardent colonial would be rather pleased with.

The prose is beautifully poignant, and Achebe gives voice to the people of the Igbo tribe as only he can. But the sheer number of characters in what is after all a short novel and the complexity of their relationships makes this novel harder to get through than it might otherwise have been. Arrow remains a classic for its subject matter, not the refinement of the narrative. 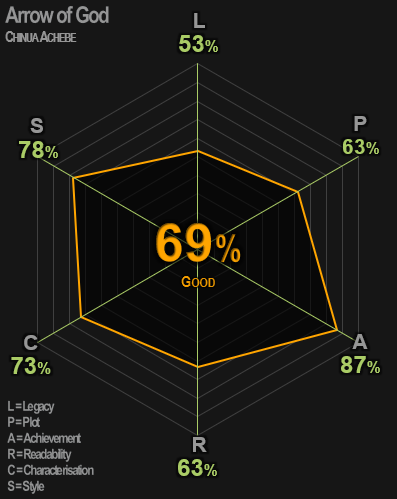