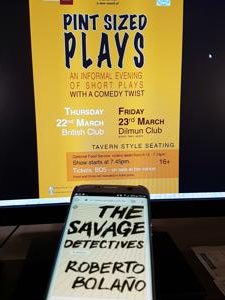 Context: had many rehearsals for three parts in two plays as part of a pint-sized comedy night while listening to this.

The Guardian describes this as a “a shaggy dog story.” Merriam-Webster defines that as “of, relating to, or being a long-drawn-out circumstantial story concerning an inconsequential happening that impresses the teller as humorous or interesting but the hearer as boring and pointless” That’s spot on. Bolaño did this for his own enjoyment, not mine.

Publishers [sic] Weekly said that “It is safe to predict that no novel this year will have as powerful an effect on the reader as this one.” and in that they are right. I can’t think another novel this year will be as powerful as this one when it comes to the desire to simply make it stop. Mind you, I’m not sure I trust what I read from any publishing company that can’t even accomplish the basic punctuation needed for its own name.

It starts out OK with this student guy joining a group of poets at university. Their philosophies rub off on him, and he tunes in and drops out as you’d expect. Then the book takes the inevitable Bolañesque shift to a series of narrations by all sorts of different characters all over the world. You’re left to piece together the relevance of all of this and, if you dare, make some sort of narrative out of it.

For the brave, the narrative that emerges is a patchwork that represents the lives of two of the founding members of this group of poets. This is then followed by a hardly-related and entirely useless final section where the original student guy is looking for another poet who is supposed to be the origin of the style of poetry this group was formed in honour of.

As my aim in these reviews is not to spoil your reading experience, I’ll tell you now that they don’t find her.

Can Bolaño write? Yes. Can he write anything worthwhile for the reader? Yes. But can he stop himself from writing hundreds of pages more than he needs to just for the sake of writing and thereby subsuming anything worthwhile in a turgid mass of drivel? Nope. He most definitely can’t. 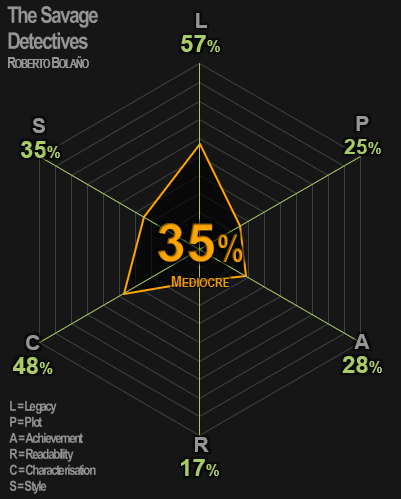