So often Eliot is held up as the paragon of 19th century English prose. Here is yet another novel to demonstrate why I simply cannot afford her the accolades that others offer.

Although the term schizophrenia wouldn’t be coined for another forty years, studies of the illness were extant and influential among them no doubt is George Eliot’s last novel. Firstly, as with Adam Bede, the novel is a misnomer. For the first third of the book, you’ll be wondering what Deronda has to do with anything at all. For someone with obvious creative abilities, Mary seems to have been a bit stumped when it came to naming her overlong writings.

There are a number of novels in here, and critics of her day even suggested that abridgements be created which allow the reader some focus. There’s the story of Gwendolyn Harleth which, on the face of it, is the simple and pretty obvious tale of a headstrong young woman whose pride leads her into a loveless marriage with a tragic end. No literary surprises there although, to be fair, if Eliot had focussed entirely on her heroine, she might well have created a character of real depth and lasting impact. In her mind, she could still have got away with the original title, too.

Then there’s the story of a young man (ah finally, the eponymous Daniel!) who has a growing awareness that his parentage is a mystery he must solve. Various contrivances later, he has all the answers he needs and has confirmed a new identity. Again, no literary surprise except the fact that someone of Eliot’s standing would have done something so unoriginal.

Where the novel surprises is it’s portrayal of yet a third storyline, that of a Jewish family and the love of their identity. I suppose that it’s this favourable and sympathetic portrait of Judaism which earned her novel a place in the pantheon. Otherwise, Middlemarch, published four years earlier, would have eclipsed it entirely.

The novel was not a product of its time. Contemporary depictions of the Jews are not kind. In fact, they’re still not kind in many parts of the 21st century world. I’m thinking in particular of the kind of parts that I’m sitting in this morning as I write this (and no, I’m not in the British Labour Party Headquarters). But many have criticised Eliot for creating such an idealised image. Positive prejudice is no more balanced than negative, they argue.

So, why did Eliot decide to do this and go even further by making Daniel so obvious a proponent of Zionism? Her sympathies had been fueled by people she’d met and ideas she’d been exposed to. She’d also become a critic of the empire (British that is) and British involvement in Palestine (not the most glorious chapter in British history) may well have contributed.

Whatever her motivations, forefront in her mind could not have been the need to construct a novel that actually holds together. This is a novel for those interested in Eliot and her literary legacy, not for anyone who wants to read the best she can produce. 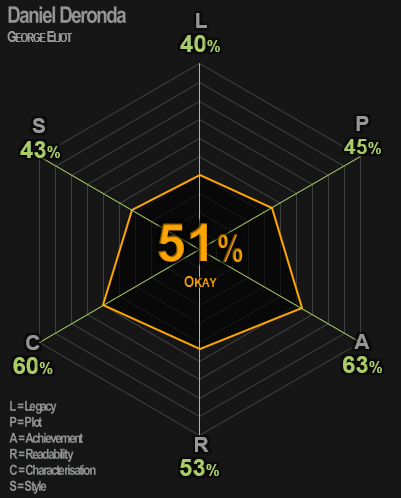 An even better read than The Midwich Cuckoos, Wyndham’s best-known novel gets off to a great start even if the ending leaves you hoping for a climax which never comes….

I read this in 69 daily installments care of dailylit.com – a wonderful idea of a website. REVIEW: Huxley had a masterful vocabulary and he uses it to full effect…

Context: Listened to this courtesy of librivox.org while walking to and from work through the bluebells in Dell’s Wood. REVIEW Long ago, when my mother-in-law and her sister asked me…