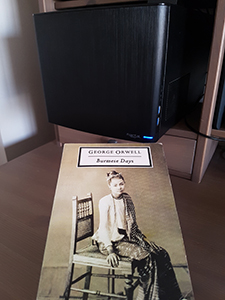 Context: built myself a very, very fast computer to speed up my photo editing while reading this.

George’s southeast Asian tale translates his scorn for capitalist Britain into the wilds of Burma where the sultry humidity and lazy pace of tropical life do little to dampen his ire.

Flory is an experienced colonial at a backwater station where the British empire is doing its level best to make its rule felt. When the young Elizabeth turns up, Flory senses his chance not only to secure his emotional future, but to provide an cultural induction to the young impressionable. Elizabeth however, lacks the ability to see beyond her prejudice and, somewhat inevitably, it all ends in tears.

Orwell uses this to set up a tension between those who see things from Orwell’s point of view and those who, well, don’t. George is clear: the empire is a vehicle for making the rich richer. The Brits come off none too well in this novel, and he drew some criticism for this at the time of its publication.

But Orwell knew what he was talking about, having spent five years as a police officer in Burma. So true to reality was this account that publishers insisted on names of characters and locations being changed because they were worried about libel suits.

Of course, it’s easy for us with the hindsight of history to look back on the colonial era and say that it was all one huge mistake. But in Orwell’s day, this was a much harder point of view to convey. Empirical Burma was one of the most valuable sources of Britain’s wealth as vast resources in teak and other commodities were exported around the globe. At the time, the injustice of this practice wasn’t something the average Brit concerned themselves with. Thus, Orwell’s book was an important voice in the wilderness.

It’s still important today, though. Having travelled and lived in nearly 80 countries, I can assure you that despite us considering ourselves a global village these days, most of the “developed world” remains entirely ignorant of the sensitivities of local cultures. There are still far too many Elizabeths and those of us who sympathise with Flory can occasionally feel like replicating his final desperate act. We need novels like Orwell’s to remind us of our own shortsighted humanity. 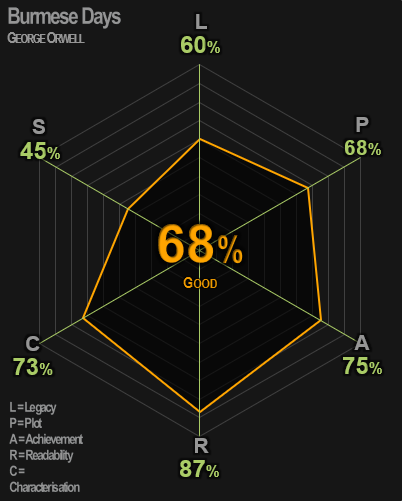 Next post: 0601 | The Man who Loved Children | Christina Stead