This is at once one of the funniest and also one of the most tragic novels I’ve experienced in a long time. Safran Foer’s tale of the history of his own Jewish family’s experience in Ukraine is told from two very different points of view. Neither are equally accessible, but together they form a splendid whole and one that is even more impressive for a first novel.

The modern-day episodes of the author visiting Ukraine are very readable. This comes both from the farcical humour and, as this gives way to plot, an increasing desire to uncover the secrets that are obviously waiting to be discovered. So far so good.

Then there are episodes woven between detailing what at first appear to be unconnected events in the distant past. These events are told in a style bordering on magic-realism with a fair amount of wordplay. However much difficulty you might encounter, I’d highly recommend that you persevere. The rewards are truly great.

In some ways, this novel reminded me a lot of The Reluctant Fundamentalist in the way that you are in the grip of a storyteller who is determined not to reveal his full hand for some time. As the end nears, the frivolity of the earlier sections is long forgotten and a chill sets in just as it does in Reluctant. In some ways, it’s inevitable given the subject matter.

I have to say that listening to the audiobook narrated by Jeff Woodman and Scott Shina was a wonderful experience. I don’t know which of them played the young Ukrainian guide, Alexander, but he’s a natural comic. The accent and drama he brings to the voice had me laughing out loud on many an occasion.

Of course the real genius is Safran Foer who provides Alex with a comically farcical and yet entirely plausible English learner’s vocabulary. Trust me: after teaching English all over the world for 20 years, Alex’s language is spot on. There’s even more of it via the website Who is Augustine which is worth exploring even if you haven’t read the novel as it will whet your appetite. If you have read it, the website’s compulsory! 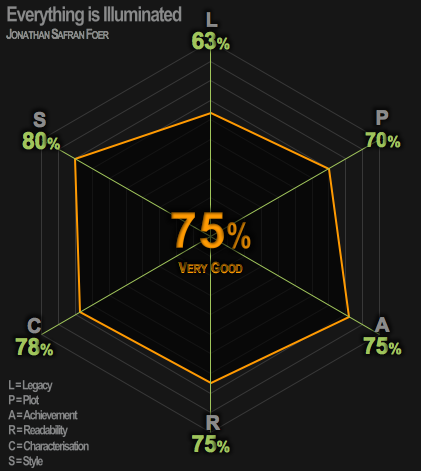