Last summer, just before a week in Sweden, we were staying at some friends. Browsing their bookshelves, I came across a lovely little two-volume boxed edition of Norwegian Wood. Perfect 1001 Book holiday reading I thought as I headed downstairs to ask if I could borrow it.

It wasn’t until I went to check it off the 1001 Books list after completing it that a horrible feeling came over me… “It’s on the list, isn’t it? Isn’t it?!”

And this was not the first, but the second time that I’d bothered to pick up this novel under the same misapprehension. Years ago, I now recollect very dimly, I bought it second-hand only to realise it wasn’t on the list and dump it in another second-hand shop. So this time, I’ve actually read it and, well, it’s one of the most vanilla novels I think I’ve ever read.

Murakami’s novels usually centre around characters on the fringes of society. Whereas in many other cultures such characters would be fascinating, in Japan, the fact that you don’t have to stray very far from the centre to be fringe means that what they regard as esoteric, we regard as, well, pretty average really.

So there’s this average guy who hangs out at college with this average girl who has another friend who’s pretty average. The average girl suffers from depression (which is, trust me, a really average condition in Japan) caused probably by the suicide of a boyfriend (which is also a really average thing to have to deal with in Japan) and so she has trouble dealing with the any kind of relationship with the average guy. This is where the pretty average friend comes in and offers support. Oh and there’s another girl who’s ‘fringe’ but the other way – a bit too positive where the other girl is a bit too negative. And she gets involved with the average guy who by this time has his own average kind of foggy depression to work through because of an issue with the average girl.

And that’s pretty much it. No scintillating prose. No surprising insights into the human condition. No memorable characters and nothing remarkable happens to anyone really. It’s all highly forgettable.

For those of you who are used to Murakami gutting cats or throwing you down wells, the extreme blandness of this novel may come as a welcome relief. For me, it was just… meh… 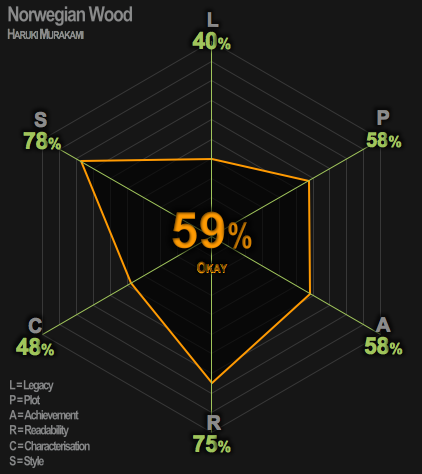 Context: We listened to this in the car over weeks and weeks. Less than twenty minutes after we finished, the car’s engine died and had to be scrapped. REVIEW Murakami…

Absolutely fantastic book. Just one of those that you come across and know immediately that you’re going to end up buying someone a copy because you just want to share…

Context: Read this on my e-reader but forgot to take a pic of it in context before I deleted it! REVIEW Oh love, love, love! Just like Love in the…

Of course, everyone knows Salinger for Catcher in the Rye, a book I read before this blog began and so never reviewed. That book seemed to be about something. This…

Strange little book this one at just over 100 pages. In this very short space of time Spark creates Lise, a very memorable character who I was never quite sure…