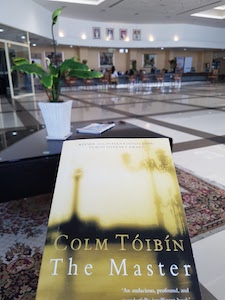 Context: Went to the dentist at a local hospital for a checkup while reading this.

It’s been a while since I read this, but the impression it made on me hasn’t left. Tóibín has written a melancholic novel of a man much misunderstood it seems. I don’t know enough about its subject, Henry James, to know whether The Master clears or muddies the water. But it certainly held interest for me as perhaps the only novel on the 1001 books list that is about a novelist who features heavily on the 1001 books list.

The Master is slow going, much like a Henry James novel. Thankfully, the clear, careful prose isn’t like a Henry James novel and is quite readable if a little slow. It’s certainly not a biography with the novel beginning in 1895 when James is 52 and ending just 4 years later. Quite why Tóibín picked this period of his life, I’m not sure, but there’s plenty of toing and froing into the past to fill in the details.

Being a kindred spirit, Tóibín has of course to explore the question of James’ sexuality, being careful not to be too explicit about this and thus maintain some of the mystery that still surrounds this topic. Apart from some close male friendships and an episode with a stranger in a hotel, there’s not a lot here.

Of more note is the constant reminder we get that James did not exactly fit in to the world his peers inhabited. I wonder how much that can be said of any novelist, especially one of James’ legacy. I can definitely testify to how much it can be said of being an immigrant, and Tóibín explores well the undercurrent of tension that runs deeply through James’ decision to reside in Britain and distance himself from his upbringing and family.

This isn’t a novel that anyone’s going to pack in their suitcase to read by the pool on holiday. It’s probably best read by an open fire on winter’s evenings with a glass of port. Tóibín has done James the justice of carefully examining and recreating his life, and the novel deserves to be read with the same attention to detail. 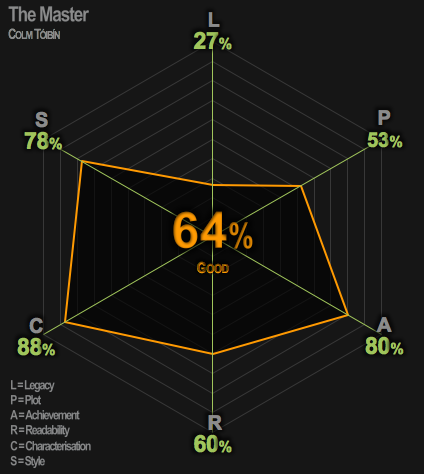